natto is japanese fermented soy bean. it’s a little stinky and as you can imagine, when i was a little kid the first time i ate natto i hated it. then as i got older i tried it again and it’s now one of my favorite healthy foods! 😛 here’s one of the simplest ways you can make natto  fresh at home – with the tanica yogurtia yogurt maker 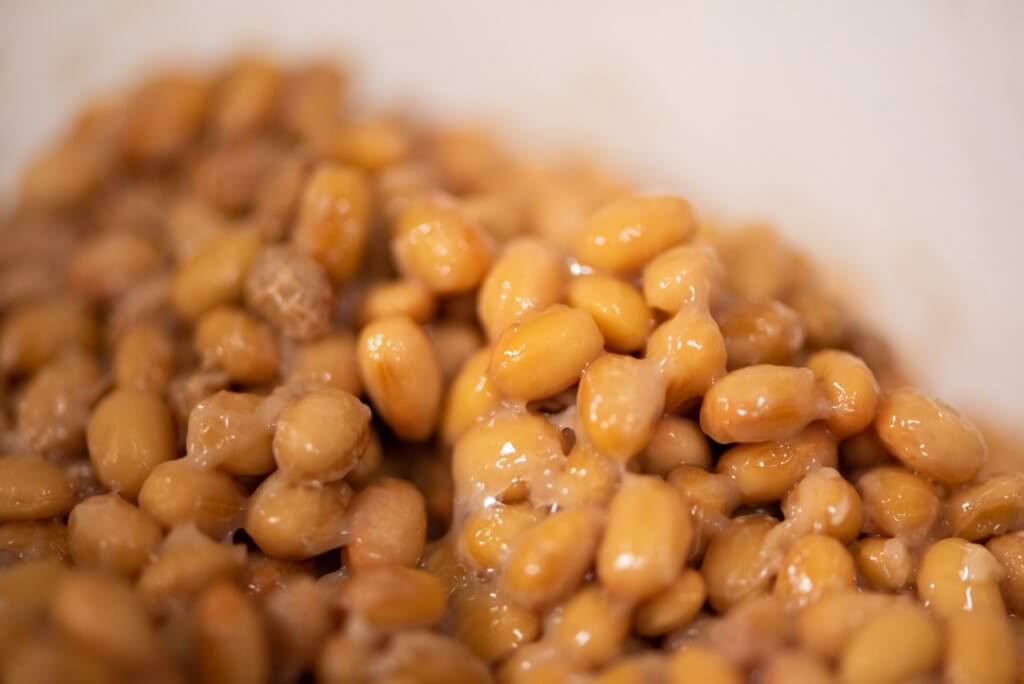 Natto (納豆) is the japanese word for fermeneted soy beans.

Thanks to little bacteria (Bacillus subtilis var. natto) it’s got a rich earthy, nutty, fermented flavor unlike anything else.

In japan, you can eat it for breakfast or even lunch and dinner for example in sushi as a natto maki.

Or just as a side with your rice!

And if you’ve ever considered trying to make it at home, I’m going to show you exactly how to do it. 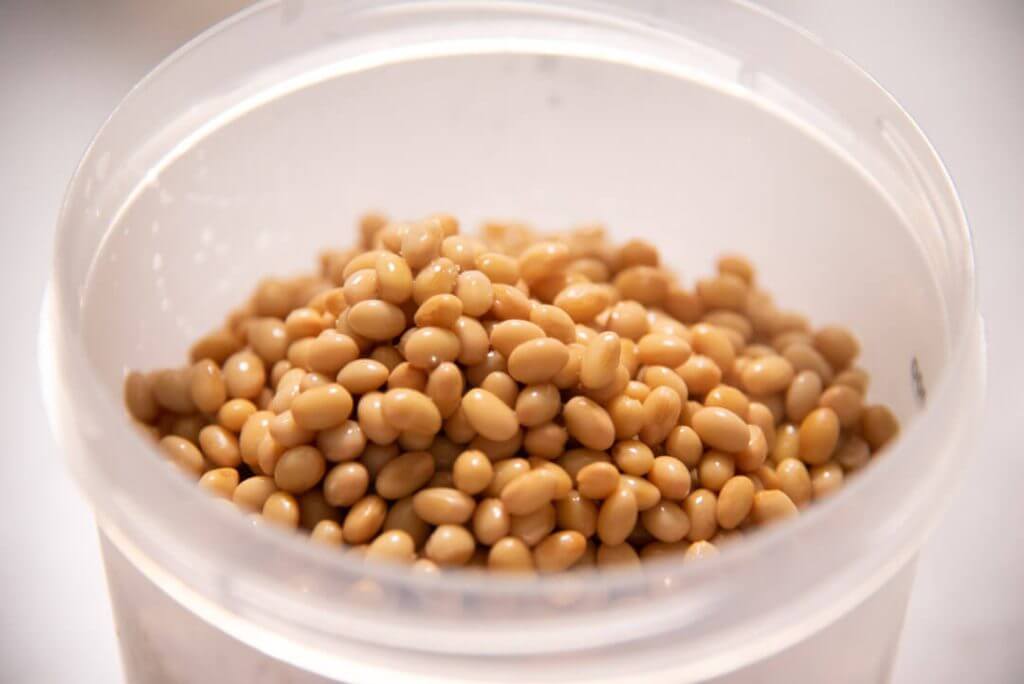 These are a little smaller than your standard soy beans and can be found online, such as through Laura soy beans.

Once you have the smaller natto soy beans, you want to boil them for about 40 minutes and they are nice and plump.

There’s a couple ways that you can prepare the soy beans and the other longer method is soaking them overnight for at least 10 to 14 hours, depending on the time of the year or how warm it is in your kitchen.

But I usually take the short cut and boil them.

Note the goal is not to cook the soy beans all the way through.

The reason you dont want finish cooking the soy beans in the boiling water is because they’ll also be steamed.

After boiling I add the soy beans in this stainless steel colander, and it fits right inside my pressure cooker.

Below is the before and after steaming – note after cooking the natto soy beans turn much darker in color. 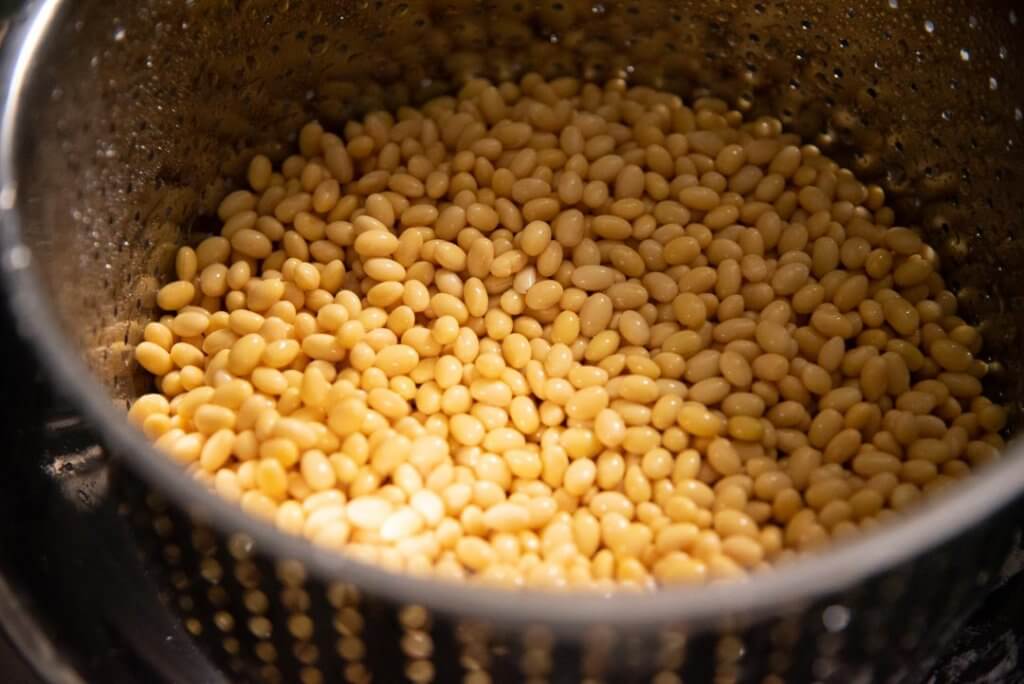 Preparing the natto soy beans for steaming in the pressure cooker

After boiling the natto soy beans, give it a little bit of a rinse.

it’s okay if you notice some of the skins falling off. o the point is to rehydrate it so that when we put it into the pressure cooker, it’ll steam evenly.

After adding the soybeans in the cooker, I add about an inch of water, and turn on the heat on high

After cooking about 40 minutes you’ll notice that the beans have become nice and soft.

And the way that you know that they’re done is you can squeeze them. 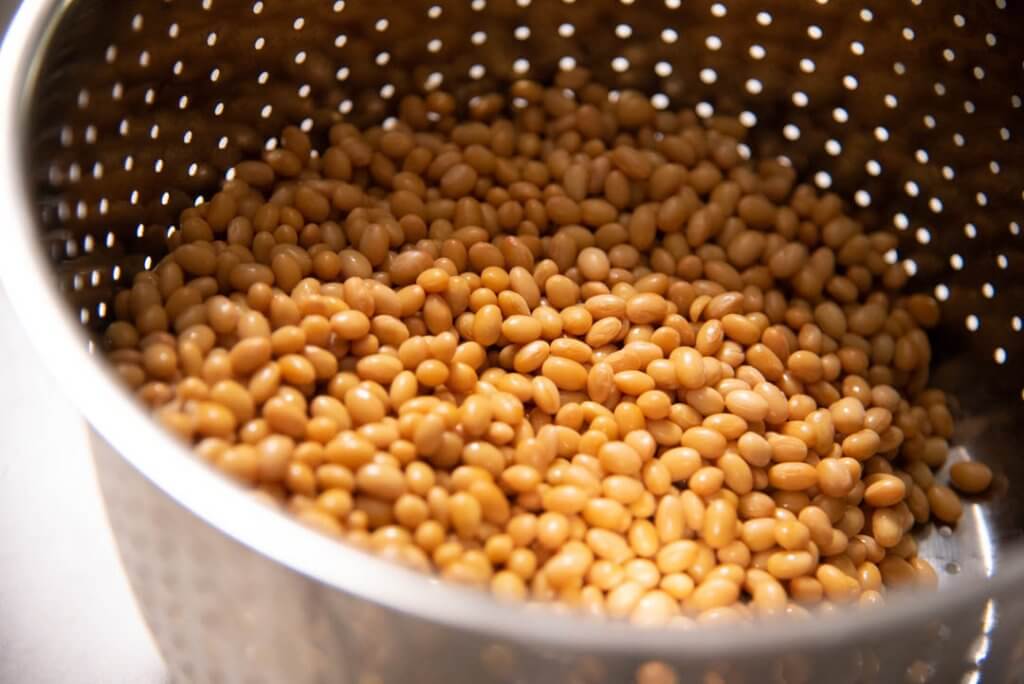 Fermenting the soy beans into natto

So we’re gonna be fermenting it in this little Japanese Tanica Yogurtia yogurt maker.

Yogurtia is a Japanese yogurt maker, and this thing does a really good job in controlling temperature.

So if you’ve never made natto before, one of the key things, one of the most important things is to regulate the temperature.

This yogurt maker makes that simple and easy. 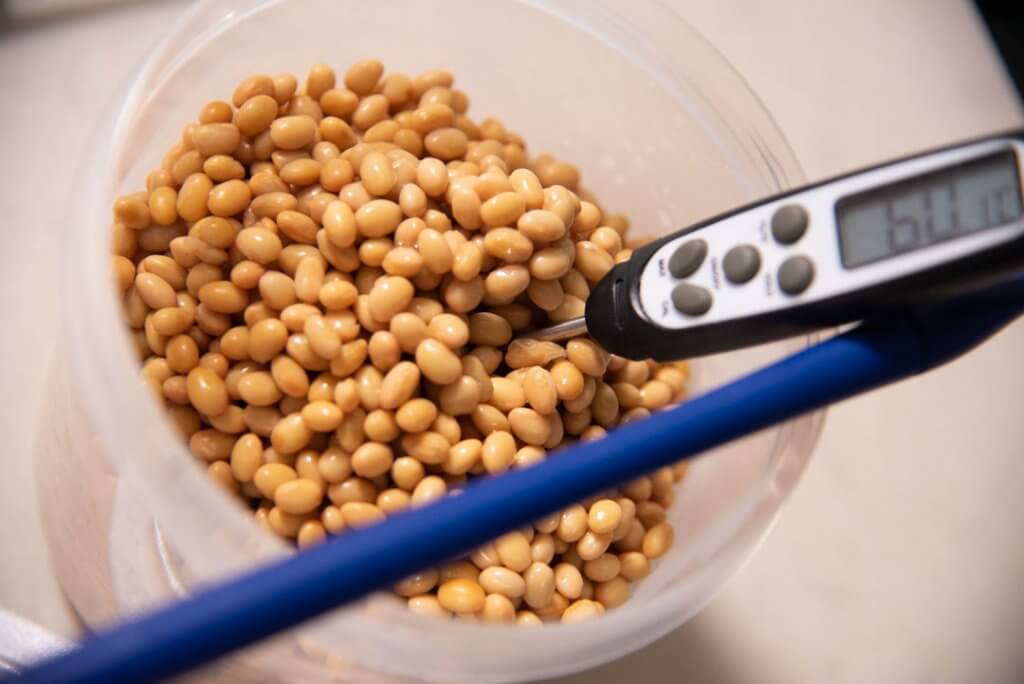 Also, what we’re going to be doing, instead of using nattomoto, which is natto starter, we’re gonna be using a real pack of natto here.

Personally i prefer the taste from natto packs as compared to the starter, but you should try both and see which you prefer.

We’re gonna just take out about a quarter piece of this, and then mix it in with the cooked soybeans once they’re cooled, and then we’re gonna let it ferment.

You’re gonna control the temperature with the yogurt maker, and then we’re gonna let it ferment, and then it’ll be done in just under a day. 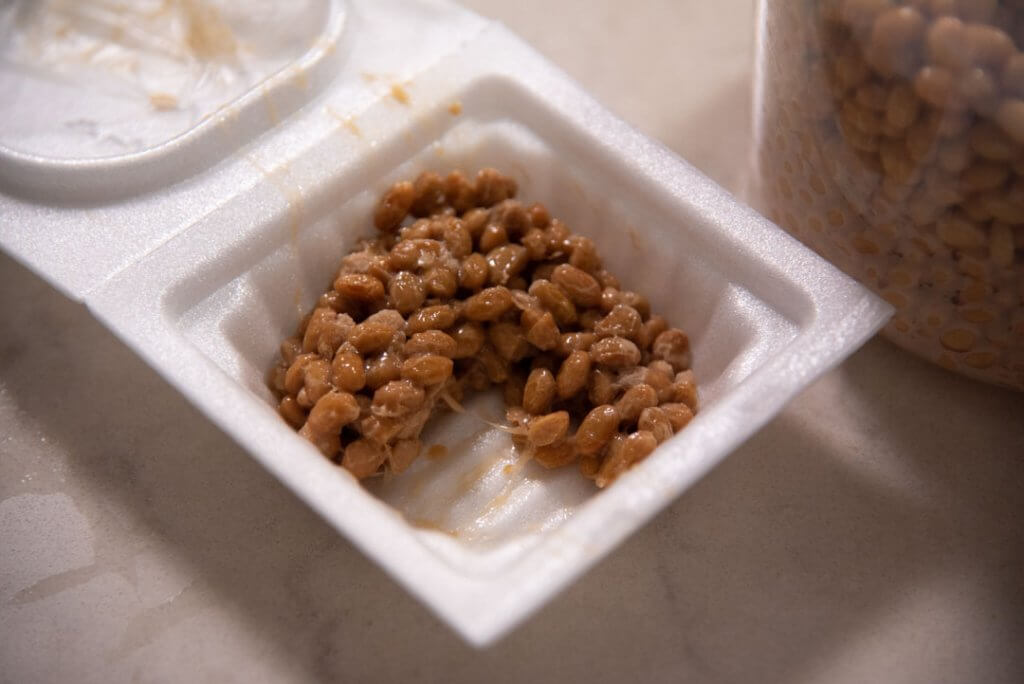 Note: I’ve made natto several times and the first time I did it was with my bread proofer and it didn’t really turn out too good because I let it over ferment. And so, it was super ammonia-ey, which is not a pleasant taste or smell. So I tossed that. The Tanica does a much better job and evenly distributes the heat – and with my first try I made homemade natto a stinky success! So that’s one of the reasons why I highly encourage you to get one of these Yogurt makers if you don’t have one already. 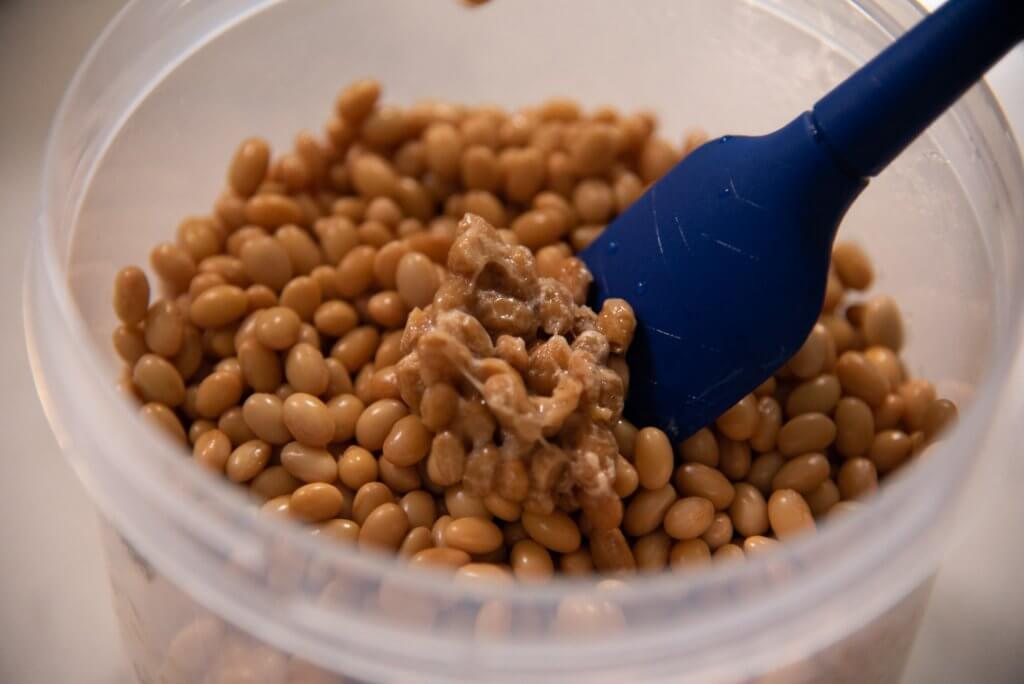 One thing that you need to keep in mind is you want to be as sterile as possible because you don’t want any competing microorganisms to try to eat the soybeans.

I wiped the container with alcohol, same with my spatula, make sure both of those are sterile.

Like I mentioned, the temperature you ferment the soy beans is key.

You want to check on it at the 24-hour mark to make sure that it is fermenting as you’d expect.

It should be a little bit stinky by then.

The longer that you let the natto ferment, the more fermented it’s going to get. And you want to avoid over fermenting it because then it’ll start to get really ammonia-ey.

So if you notice like sort of an ammonia smell, that might be time to take it out and stop the fermentation.

When you mix in the natto starter (nattomotto) or the quarter piece of natto pack, ensure you evenly distribute it. Make sure all those chunks, if there’s any chunks, of natto are broken up so that they’re individual pieces. But basically what we’re trying to do is trying to get as many of the soybeans into contact with the already fermented natto for an even fermentation.

The natto will also continue to ferment though with the lower temperature, you slow it down, and the bacteria, little microorganisms, further penetrate into the natto beans so that the flavor is complete. 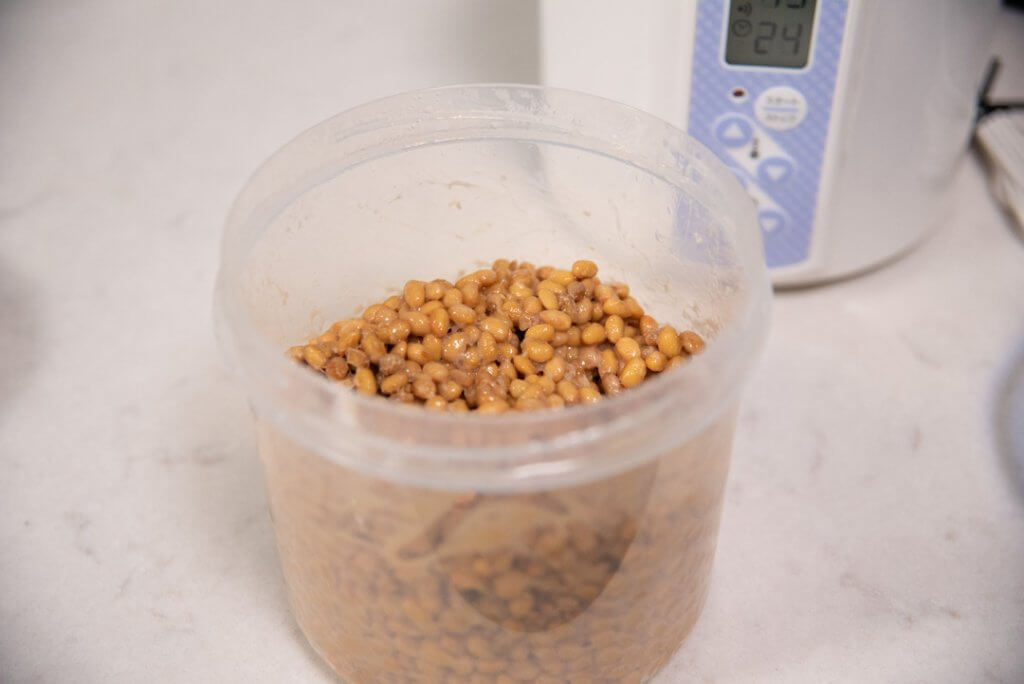 more tips for you when making homemade natto

you’ll need to keep a few things in mind –

1. the soy beans are best steamed rather than boiled (as you finish watching the video, you’ll notice we cheated a bit)

2. you can use natto starter (powder) or a section of a natto packet to seed your soy beans

3. the temperature and duration are extremely important. too hot or cold and the natto won’t ferment, too long and the natto will over ferment resulting in an unpleasant ammonia taste and smell. use a thermometer if needed

4.even when the natto is fermented just right, it’ll have a bit of ammonia smell and flavor, but it will mellow out after a few days in the refrigerator. taste it on day 0 and day 7 and you’ll notice a big difference in the flavor of the natto.

5. i’ve found 24 hours to be just right with this tanica yogurtia yogurt maker. which i bought specifically for making natto and a few other homemade things like yogurt.

6. the recipe i made above makes a good amount of natto, so if youre not gonna eat it right away, allow it to rest a few days and freeze a portion.

I think the biggest difference for me when I’m making a homemade natto is the texture.

if you’ve ever been to Japan and had natto in Japan as opposed to the natto that you can get here in the US, the texture is very different.

I guess the flavor is slightly different, but it’s not as noticeably different as the texture.

So I think that’s the biggest benefit to making homemade natto.

it’s just like the way it is in japan!

Also of course the satisfaction of making something with the help of microorganisms is always fun too.

At least for me! 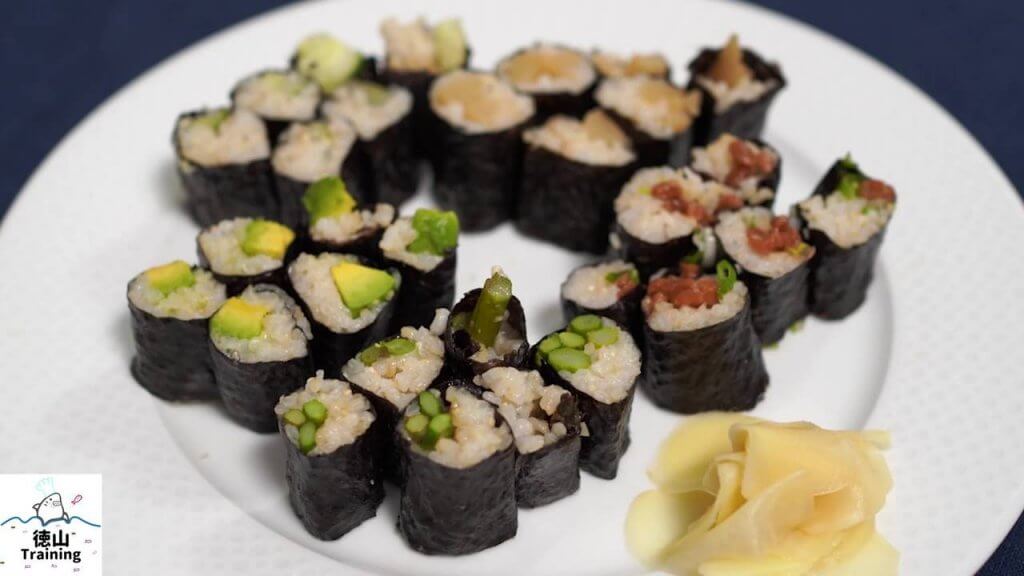 how to eat your natto?

If you’re eating the natto alone, common toppings include

Natto goes well with many different foods too. For example 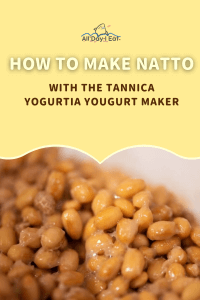 how to make natto | with the tanica yogurtia yogurt maker video 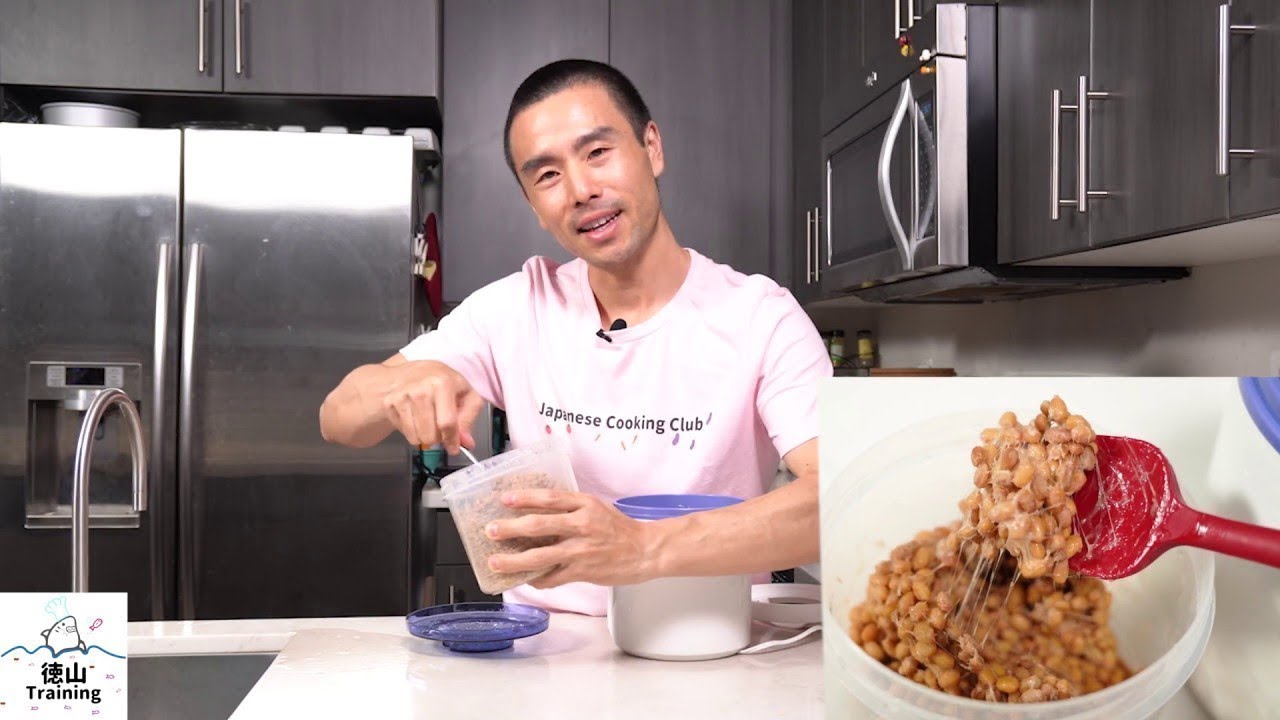 If you enjoyed this video, subscribe for more videos like this one if you haven’t already, leave any questions or comments below. Give me a thumbs up if you enjoyed it. And I’ll see you guys in my next video.

how to make natto | with the tanica yogurtia yogurt maker 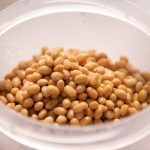 have you eaten natto before?

Some people don’t like it and some people love it, so I’m curious to see what you think.

if so what do you like to put on it?

if not, do you think you’d give it a try?