This is just a preview of what plant-based Japanese food can look like. These are some of the dishes that we made last year in the Japanese cooking club.

So again, as I said, these are going to be dishes that mostly call for plant foods and very minimal use of processed foods and no animal products. 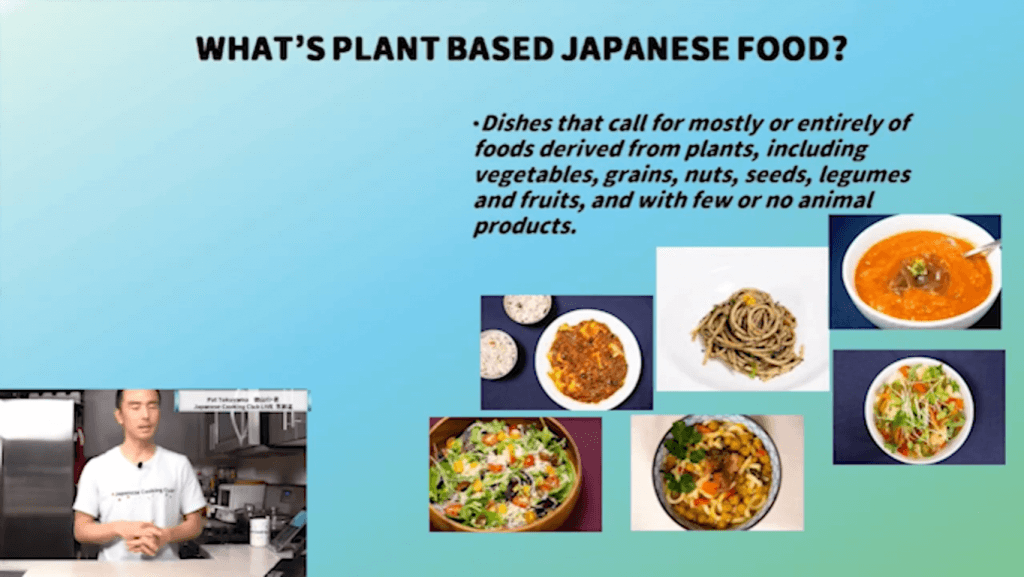 That’s a question that I had. But because there are a lot of international and national guidelines, like I talked about earlier that advocate the incorporation of eating plants, vegetables, and so on. I think that the evidence is pretty overwhelming in favor of this type of lifestyle. We have our treatment guidelines for the American Diabetes Association, American College of Cardiology, which have treatment guidelines for heart disease. 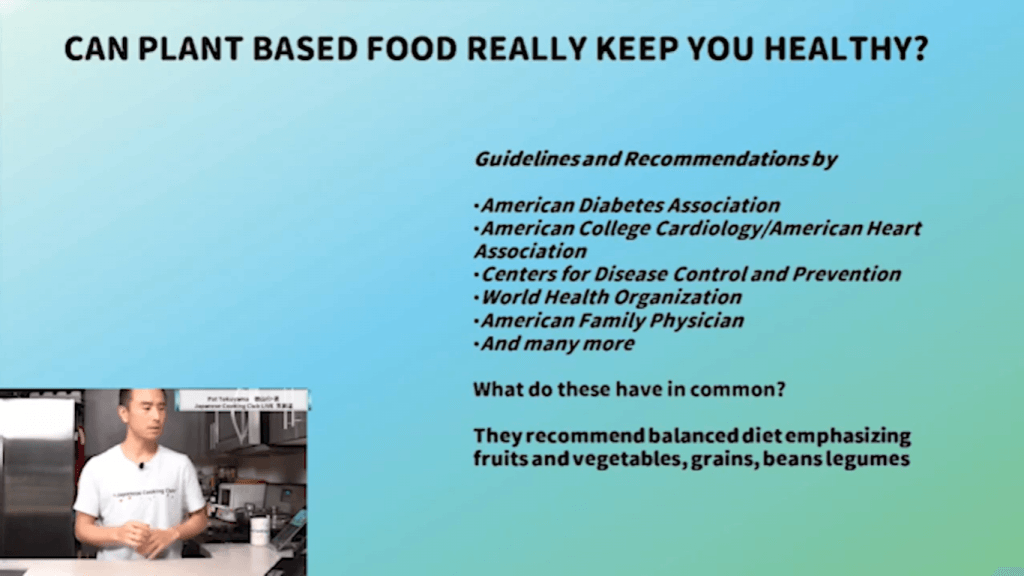 Same with the Centers for Disease Control. So the CDC, the World Health Organization, the American Family Physician, which is a publication for doctors, physicians, and many more, and all of them have the same thing in common in terms of primary prevention in that you should focus on a very balanced diet emphasizing fruits, vegetables, grains, beans, legumes, and minimize the eating or cooking of animal products, things that are high in fats, cholesterol, sugar, or processed.

This is from the American Diabetes Association website, and they compare a bunch of different types of diets if you want to call them that and what their evidence today shows in terms of supporting them and their health benefits.

This might be a little bit small, but I can share the link with you guys so you can refer to it on your own.

But you can see the plant-based diet would be the second row right there, vegetarian and vegan diets. They combined it. And there’s a checkbox there that says it reduces the risk of diabetes. It also decreases the A1C, which is your average blood sugar level for the past three months. It’s a measure of your diabetes. so it helps to reduce that a lower A1C is better, and also it helps with weight loss.

And one of the reasons for that, it doesn’t have a necessarily high amount of calories, like from high fructose corn syrup or sugar because you’re eating plant foods. Evidence or studies have shown that also, animal protein helps to contribute to insulin resistance, which contributes to your diabetes risk and could also potentially lead to weight gain. So that’s another reason why that’s there. 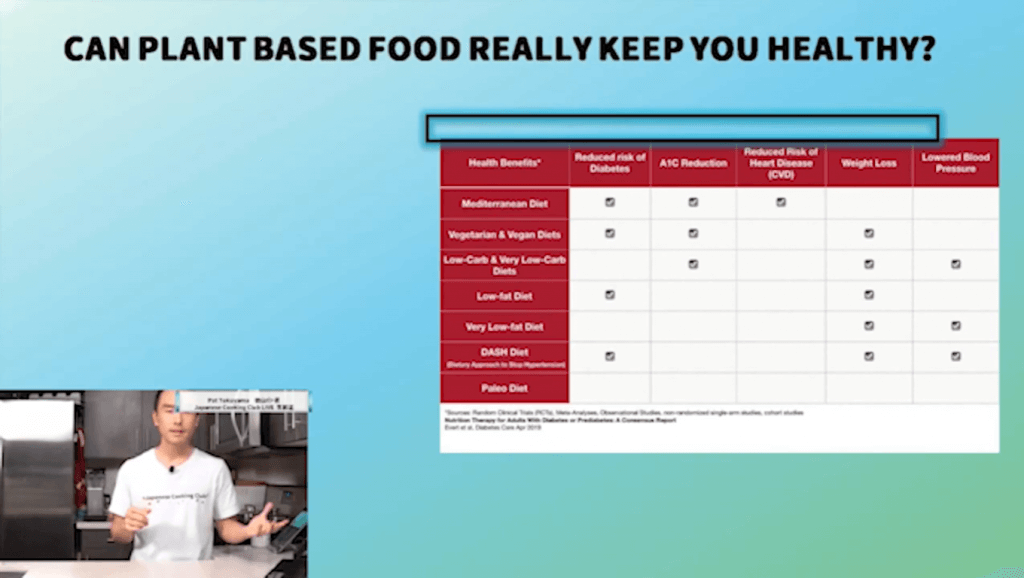 And in terms of the other diets, you see the paleo diet at the very bottom. There haven’t really been any studies that have supported that type of diet in terms of improving diabetes or reducing the risk of getting diabetes as well as cardiovascular disease, or weight loss, or lowering blood pressure. So that one isn’t necessarily very compelling, I mean, just by looking at this table, I don’t know what you guys think, but that’s probably the last thing that I would ever try.

And then, the next more compelling ones are going to be the dash diet, which is actually a diet that’s promoted by the national heart and lung blood Institute to lower blood pressure. So it’s specifically for people with high blood pressure. It’s a low-sodium diet. And that one actually has evidence for diabetes, as well as weight loss, and lowering blood pressure.

And then at the top, another one that’s somewhat comparable to the plant-based/vegan slash/vegetarian category is the Mediterranean diet, which you guys probably know of. And that one also has some evidence to support reducing the risk of cardiovascular disease, as well as diabetes. To answer the question at the top: Can plant-based-food really keep you healthy?”

I don’t know if you guys don’t believe me by this point with all of the evidence that I’ve just shown you. I don’t know how to convince you otherwise. If you don’t believe me, that’s fine. You can believe what you want. I’m just here to show you a new way of looking at things with that.

We’re just gonna wrap up with a couple of other reasons for why I switched to the plant-based lifestyle and some of the immediate things that you will notice and experience yourself if you decide to make the change or even just try it out for a few days on your well-being. 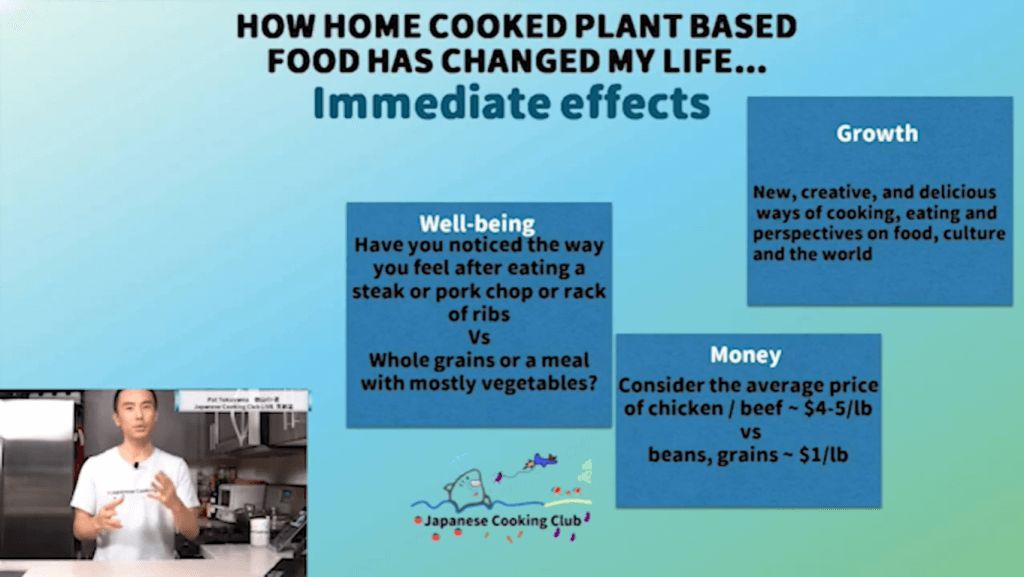 Well-being:
One of the things that you may notice is if you eat a really heavy meal, something like maybe a cheeseburger and fries, or maybe a pizza with a lot of cheese, something that’s really greasy, maybe like a steak with mashed potatoes and butter, and all that stuff, you’re not going to necessarily feel as super-energetic and peppy as you would if you ate a light meal, like maybe a salad with some grains.

And that’s because those meals are high in fats. The first ones that I was talking about, like the steak, the hamburger pizza. And you’ll get like a food coma because your body just ingested a lot of energy and it needs to digest it. So when that happens, it’s going to shunt some of the blood away from your brain into your stomach so that it can digest all that food.

And that’s one of the reasons why you get a food coma. And it’s a very different feeling from when you have something light and healthy that’s plant-based.

If you have a whole-grain salad or any of the Japanese dishes that I make, which are relatively light, you’re not gonna feel that way. You’re not going to get like a heavy, “Oh, I feel so gross” kind of feeling.

Money:
In addition, if you decided to try this out to yourself, you’ll notice that you’ll start to save money on your grocery bills.

And the reason for that is because animal and fish protein generally costs a lot more by weight as compared to plant-based sources of protein. So, for example, in general, the markets around here where I live, you can get chicken and beef around four to $5, a pound, maybe eight or $9. If you’re going to get organic chicken or beef, versus if you get some grains, perhaps something like farro, which is a type of whole grain or barley, a different kind of whole grain, or even something like beans. Beans are really cheap. You’re going to be spending just maybe around a dollar a pound, or even less than that.

And you can get a lot more nutrition or servings out of that amount of beans or grains as you would chicken. So it’s a pretty big difference there in terms of cost. As you can see on the chart, it’s like four to five times, just looking at that example.

Growth:
And also, growth is another thing because chances are, if you grew up in America and were raised here, you probably have the same cooking habits as I used to have in terms of what you would eat. So the standard American diet, the SAD diet that I was talking about before is mostly animal protein-focused and seafood-focused (maybe depending on if you live on the coasts), and not necessarily so much about vegetables.

If you switch to this lifestyle, it’s going to be a new way of cooking. And it’s going to be an exciting opportunity for you to learn and challenge yourself. So those are the immediate effects. In terms of the long term effects, this is really where plant-based foods shine because this is the long game.

This is something that you’re going to experience the benefits of in the long term. Years. Years from now. That’s why it’s an investment. In terms of your health, plant-based foods generally have a lot less saturated fats and less cholesterol. A lot of cholesterol comes from animals because they have cholesterol in their flesh.

Also, plant-based foods have more dietary fiber, which only comes from plants. And it’s also less likely to be contaminated because it’s at the very bottom of the food chain. As you may know, the higher up in the food chain that you go, the more environmental chemicals or pollutants will accumulate in flesh.

For example, you may have heard of mercury in tuna. One of the reasons why it’s in tuna is because tuna is a very big fish, and it eats other smaller fish. And as it eats all the smaller fish, it accumulates in the big fish. And also, in terms of money, as I mentioned before, you’re going to save money by incorporating more plant foods into your lifestyle.

And also, if you have kids, if you have a family that you’re concerned about, the environment is going to be a lot better off because it’s more sustainable. Raising cattle, chickens, and livestock on grass takes a lot of energy. And it takes a lot of resources to maintain and support. Plant-based foods don’t require as much because it’s just basically being fed by the sun.

Plants just need sunlight and water in the dirt. That’s all they need. In contrast, animals need to be fed plants. So, it’s very different. It’s a lot more environmentally-friendly. These are some resources for you guys.