The next topic that we’re talking about is the three secrets to Japanese cooking. Can you guys guess what they might be? All right, so let’s get into it. The three secrets for Japanese cooking. All three of all these ingredients here have something in common. Dried shiitake mushrooms, dried kombu, mirin, osake, and shoyu, soy sauce, and miso paste. If you’re familiar with Japanese food, you know that umami is sort of like the fifth taste. 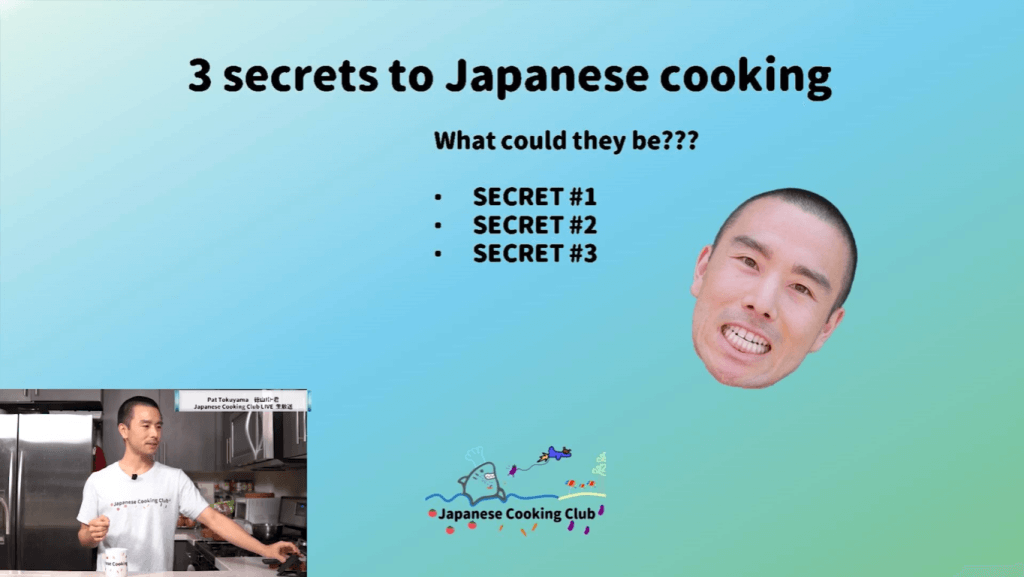 What all those ingredients have in common is umami. So we have sweet, salty, bitter, and sour, and this is considered the fifth taste, umami.

In simple terms, basically, if you don’t know what umami is, it’s naturally produced in plants. So things like tomatoes, seaweed, mushrooms, meat, fish, all of those things naturally contain the building blocks or ingredients for what will become umami when they’re cooked or prepared.

And you can also make umami. You can create it by fermenting foods. Miso is a fermented food, same with pickles. Or you can synthesize it in a lab like a chemical, which is what MSG is, monosodium glutamate.

Where can you find umami in terms of plant-based Japanese food?

It’s mostly coming from a few ingredients. One of which is kombu and shiitake dashi, the seaweed and mushroom broth, which you can use for a variety of different ingredients.

Glutamate is coming from plants and dairy. The guanylate comes from dried mushrooms. And then inosinate is coming from fish and meat. And if you don’t know why the guanylate only comes from dried mushrooms, the reason is that fresh mushrooms have the precursor to the umami compound. And once it’s dried, because during the drying process, the cell wall breaks down, that compound transforms, and then it becomes available. That’s one of the reasons why fresh mushrooms are not going to have as much umami as dried mushrooms. 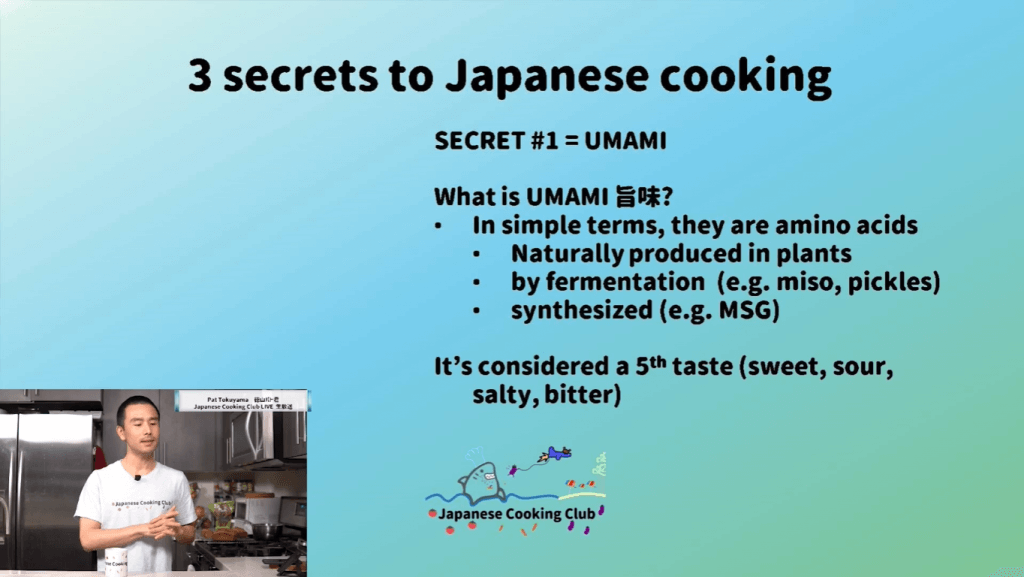 How can you leverage umami?

There are many different ways that you can leverage umami. You want to combine the ingredients together. That’s the easiest way for you to get synergy. So they’re going to work in tandem with each other, and they’re going to drive even more exponential results, as opposed to just a 1x or 2x effect.

In general, it’s around a 7x to 8x umami effect as compared to when those ingredients are used by themselves. Using shiitake dashi by itself, using kombu dashi by itself, is not as powerful as if you were to combine those two — or even those three if you’re using katsuobushi, which is the dried fermented fish flakes.

You can combine them to make more of a pronounced effect, and any of those combinations would work. That’s one way that you could use and leverage umami. That is one of the things that differentiates Japanese cuisine from other types of cuisine is because we are focusing on ingredients that leverage umami, or dishes that leverage umami that calls for dashi, and really enhances the natural flavor of the foods.

That’s what umami does. It helps to improve the flavor as well as the color. If you’re using MSG, if you’ve noticed, whenever you add MSG or a restaurant adds MSG to vegetables, they’re going to look a lot brighter and a lot more colorful than they naturally are. That’s one of the ways that you can tell if they used MSG. It does help to enhance the flavor of food. And if you’ve ever had traditional Japanese food, you know that it’s not necessarily so much about the strong flavor as it is about the subtle, delicate, and refined flavor.

In my experience, I would say Japanese food is very refined as compared to other types of cuisines, which, for example, Mexican food, if you’re eating spicy Mexican food, that’s more of like an in your face, like pow! Or spicy Thai food, for example. That could be very spicy, but Japanese food tends to be very delicate and not necessarily spicy.

So secret number two, what do these ingredients have in common? Soy sauce, miso paste, mirin, osake, and amazake Can you guys guess?

Here’s another secret for you guys.

These are all key ingredients that were created or made using koji. Koji, if you don’t know what it is, it’s basically a mold or a fungus, and it helps to do several different actions of which we’ll talk about in the next slide. 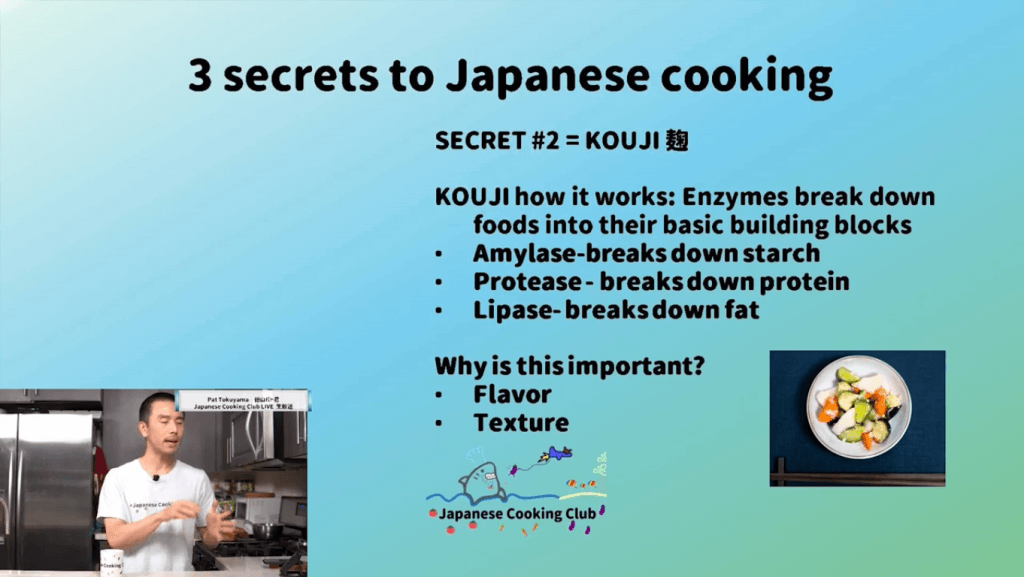 Some of the ingredients that you can use koji in your cooking are shiokoji which is salted koji, shoyu koji, which is a type of soy sauce that has been — or it’s kome koji. which is the rice inoculated with the koji. And then you add soy sauce to it.

And it’s sorta like a dipping sauce or dressing, or seasoning. And then last, we have amakoji which is sweet koji. We have two salty versions, and then we also have a sweet version, which is made from combining the rice koji with cooked rice and letting it ferment for a couple of days.

That’s going to create a very sweet flavor because the starch in the rice is going to break down into sugar and create sweetness. So that’s a picture there of shiokoji, which is salt koji, and then shoyu koji, which is the darker sauce. How does it work? Koji being a microorganism, so Aspergillus, it’s a mold.

It’s going to break down different macronutrients or molecules, if you want to call them that, into their base components.

That’s why people use shiokoji for marinating steak, fish and chicken because it breaks down those proteins and it releases those amino acids. Some of these are umami enhancers, and it’s going to help improve and increase the flavor. And then the second thing is texture. So it does flavor and texture.

The way that it works with the texture is, going back to the meat or seafood analogy, is when you’re breaking down those proteins, that’s also going to release water from those proteins or other molecules. And when that happens, it’s going to change the texture.

So if you have ever wanted to sear a piece of fish or a piece of steak, for example, one of the ways that you would achieve a good sear is by salting it first for a little bit, letting it sit, let some of that excess moisture come off, pat it dry, and then throw it on a pan to sear. Same thing happens with kome koji or shiokoji. And that’s one of the reasons why it works well as a marinade for both meat, fish, and for even vegetables.

A few benefits for using those ingredients, the kome koji, or the shiokoji, salted koji, shoyu koji, which is the soy sauce koji, amakoji, which is more of a dessert. You can also use it in place of sugar or other sweeteners. It has a very unique flavor. It’s kind of fermented kind of funky, and it’s a great dessert.

Secret number three is you 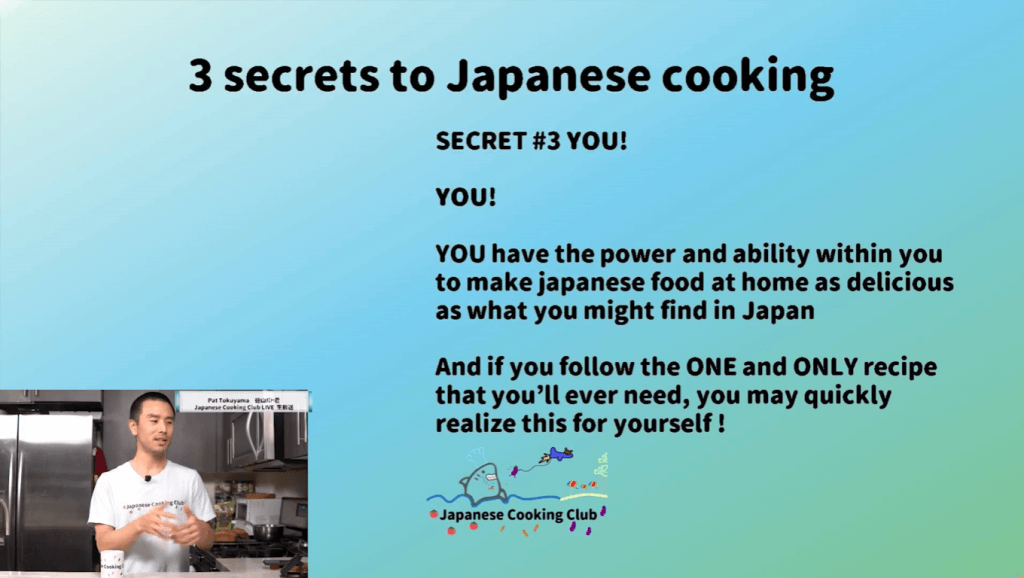 You are the secret to Japanese cooking because you have the power and the ability within you to make Japanese food at home. Just like you would find as if you were in Japan, eating at a Japanese restaurant, or maybe even a Japanese home in Japan.

So if you follow the one and only recipe that I just shared with you in the previous slides, you’ll realize this for yourself. So you won’t have to take my word for it. That’ll be something that you can realize for yourself in as little as a few days, maybe even one day, if you take action.

Let me ask you, have you ever felt that feeling of satisfaction or accomplishment? like when you made a dish that you cooked and it turned out really good, the way that you wanted or even better, and it blew your mind and you can’t wait to make it again, and it was better than you expected. Do you remember what that felt like?

So just imagine that you can have those feelings over and over again, and after each Japanese dish that you cooked with your own hands and your own kitchen. Imagine what that would feel like. Just take a minute and close your eyes. It’s one of the reasons why I put the little face there to illustrate, to set the example, to truly imagine what it would be like to feel that.