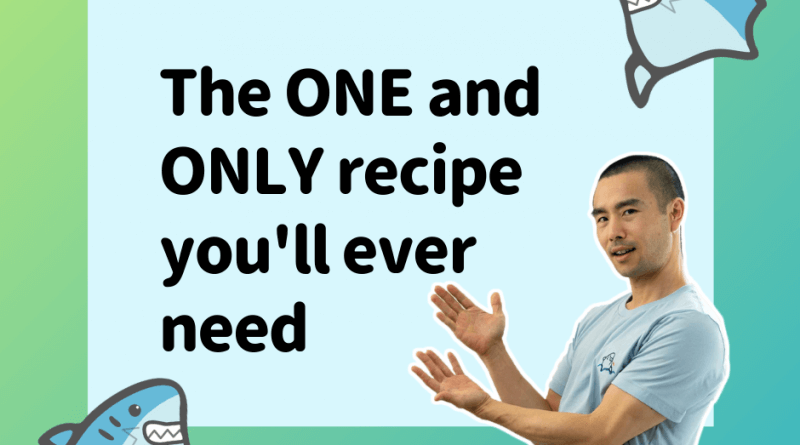 What we’re talking about now is the one and only recipe that you’re ever going to need to cook plant-based Japanese food. And you can actually use this recipe for many other things. It’s not restricted necessarily to cooking, but I thought this would be a good fit for our training because we are talking about cooking. I’m excited to see what you guys think of this!

The one and only recipe that you’re ever going to need?

Can you guys guess what this could be?

The one and only recipe that you’re ever going to need is this. 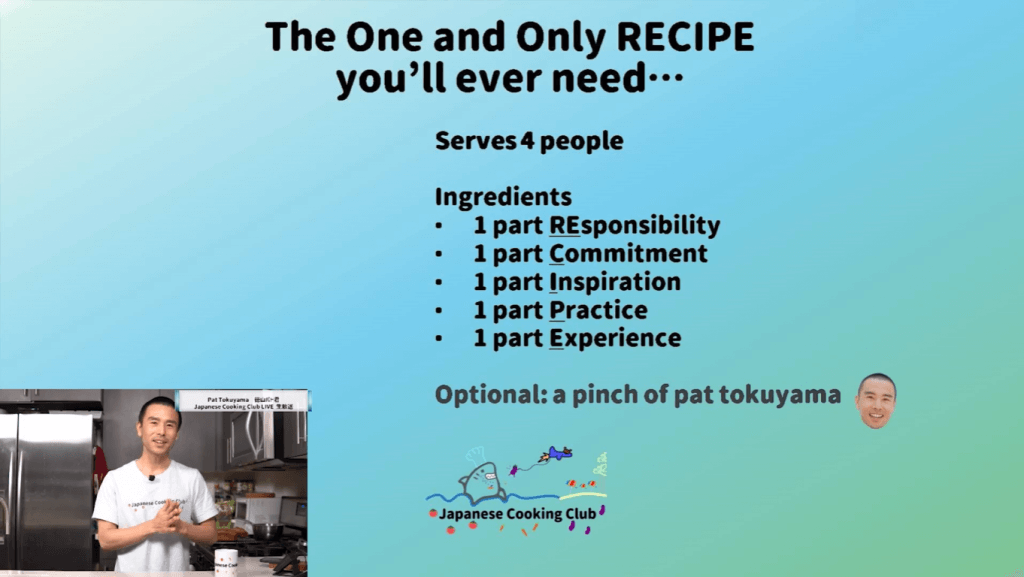 This serves four people. At least that’s what I put for this recipe. We can change it to serve as many people as we want.

One is responsibility. Two is commitment. Three is inspiration. Four is practice. Five is experience. (Optional: a pinch of Pat Tokuyama — me!)

What is responsibility? This is something that I don’t know. They didn’t teach me in school what it means to be responsible. 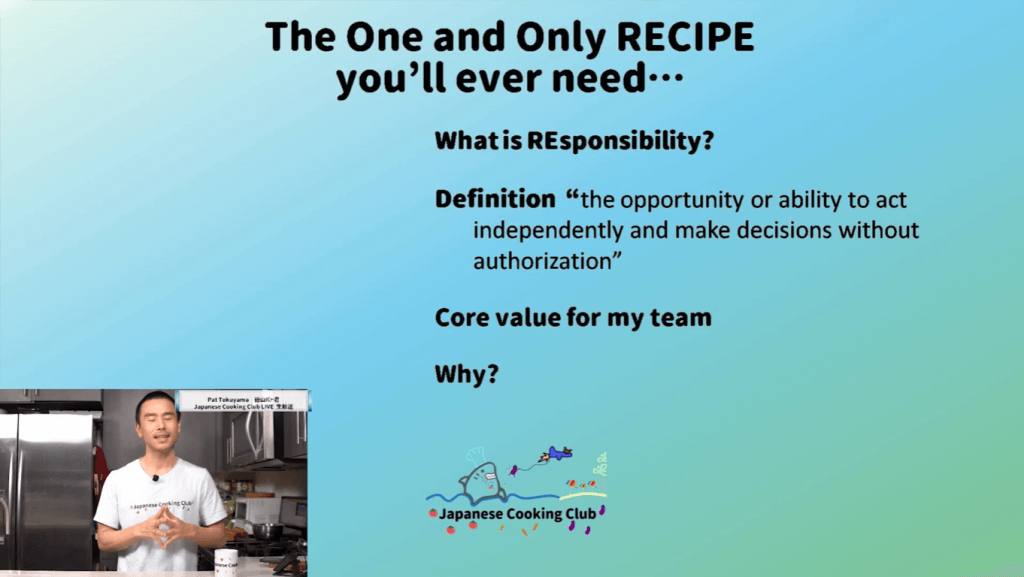 The definition that I put there so that we’re all on the same page is the opportunity to, or the ability to, act independently and make decisions without authorization. I think most of us in school were trained or were indoctrinated from a very young age to always ask for permission.

“Because this happened, I cannot do this.”

That’s not a very empowering way to look at things. And that’s one of the reasons why I talked about it at the very beginning when I talked about who this training is for. Because I do not attract the type of person who’s going to have that disempowering mindset where they’re a victim, and they’re always going to be blaming people or circumstances for why they don’t have what it is that they want in life.

The key ingredient in this recipe is responsibility. It’s empowering when you’re responsible.

The next key ingredient for this recipe is commitment. Commitment is also another thing that they don’t really teach in school. 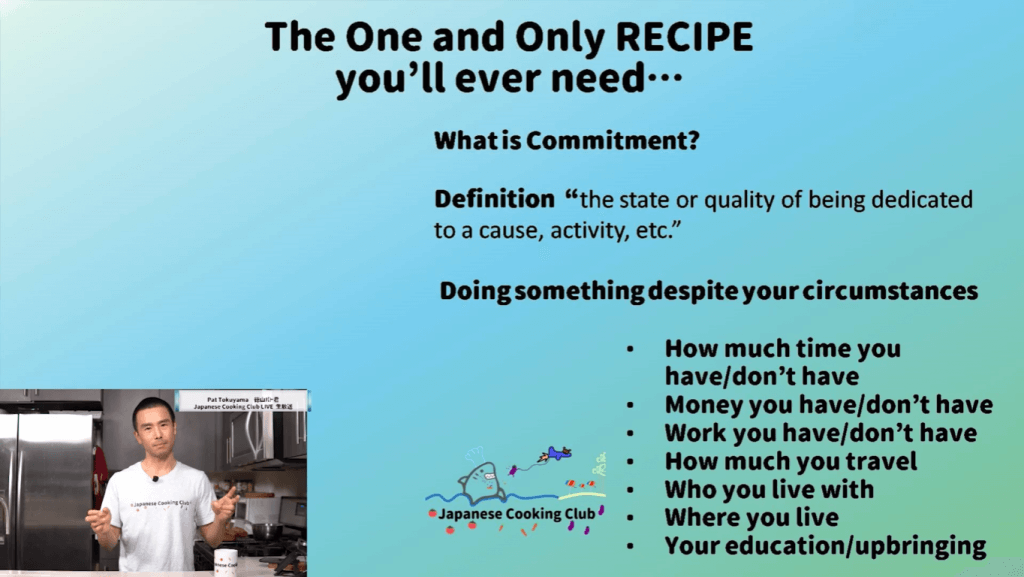 The state or quality of being dedicated to a cause or an activity. I just put that in more layman’s terms of doing something despite your circumstances.

And I can tell you a story that just happened this weekend. My manager for my virtual team quit. And he was supposed to do a bunch of different things for me this week to help me promote this little training series, and then after the fact, and later on this year. But he quit.

And because I am committed to doing this for you guys, to share this knowledge, to help empower you to be healthier this year in 2020 and beyond, I’m doing it anyway. All the things that he was supposed to do, I’m staying up later at night to make sure that they’re getting done. That’s an example of commitment. Doing some things, despite my circumstances.

Right now is a very busy time for me at work. I work in the healthcare space. And usually, the very first part of the year is very different or very busy with the people’s benefits changing for the new year, the new plan benefit year. That’s one of the reasons why I hired him was because I knew that it was going to be busy. But since he left, I have to do all the work that I assigned him.

And I’m doing it despite my circumstances, my responsibilities to work, and other commitments that I have as well. That’s an example of commitment.

The next ingredient is practice. What is practice? Practice is the application of an idea, belief, or method. That’s the definition.

Why is practice important? Well, with action comes clarity. 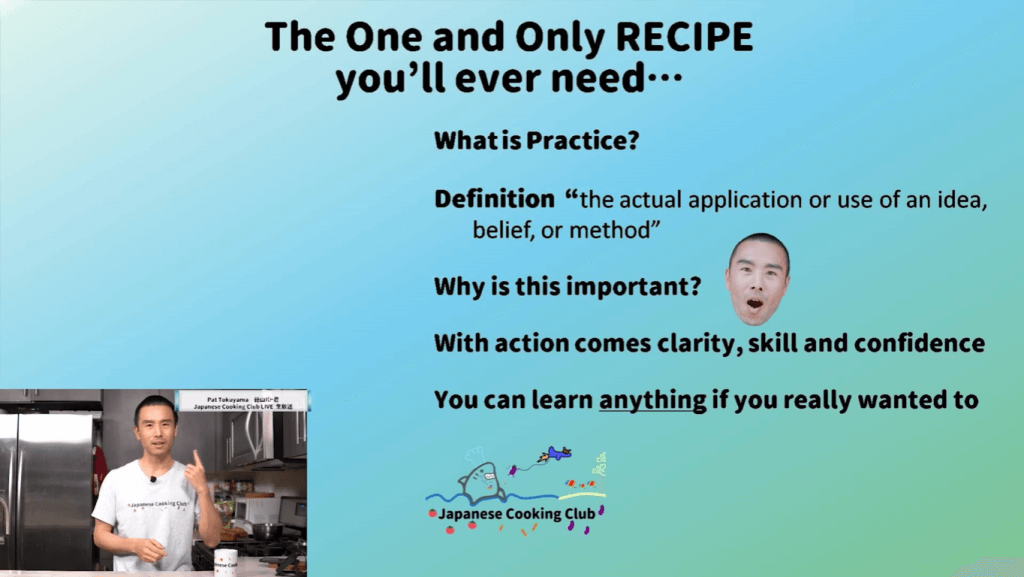 If you’re not a person who’s very confident in the kitchen, for example, you don’t feel like you’re awesome, like a professional chef, or even if that’s not something that you’re aspiring to, maybe you feel like you could be better. That there’s always room for improvement. That’s actually my perspective. I could always be better at something.

The only way that you’re going to be better or get better at something is through practice. That’s why it’s a key ingredient for this one and only recipe that you’ll ever need. Let me know what you think about that. And I truly believe that if there’s something that you wanted to learn, you could learn it. 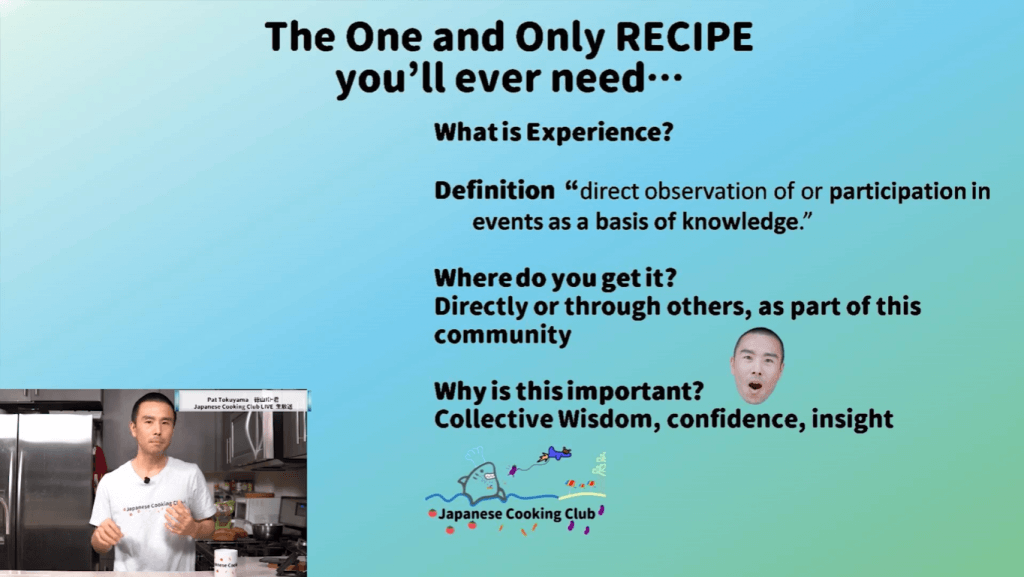 The definition is direct observation of or participation in events or things as a basis of knowledge.

So how do you get experience? You get experience through practice. And you can also get it through the community, or through other people, reading books, watching videos, learning from other people who have been there before you. Those are the two ways that you can get it.

One is through direct experience yourself. When you’re doing the action, you’re doing the learning, or listening to others and learning from them. And why is this important? Because there is collective wisdom when you are learning as part of a community.

You have a group of people, maybe they have the same interests, same goals, same aspirations, and you can learn a lot by interacting with them, being around them. Have you heard that term or that phrase, that you’re the sum of the five people that you hang out the most with? Have you guys heard that before? Let me know in the comments. I think it’s true. And if you are constantly around people who are negative, disempowering, telling you that you can’t do something, that’s going to eventually rub off on you.

As compared to if you surround yourself with people who are like you, who are going to build you up and who are going to support you and believe in you, maybe even believe more than what you thought you believed in yourself, or what was possible for you, that’s going to really change your mindset and affect you in more of a positive light.

It’s the fruit of all of the things that I’ve gone through, all the communities that I’ve been in the past few years. Because I’ve experienced it myself firsthand, I know the power of collective wisdom. And I want you to experience that too. That is the last ingredient of this recipe.

Now that we have our core ingredients or recipe, we’re going to go into the directions. And the directions are very straightforward. There’s only three steps in this recipe. 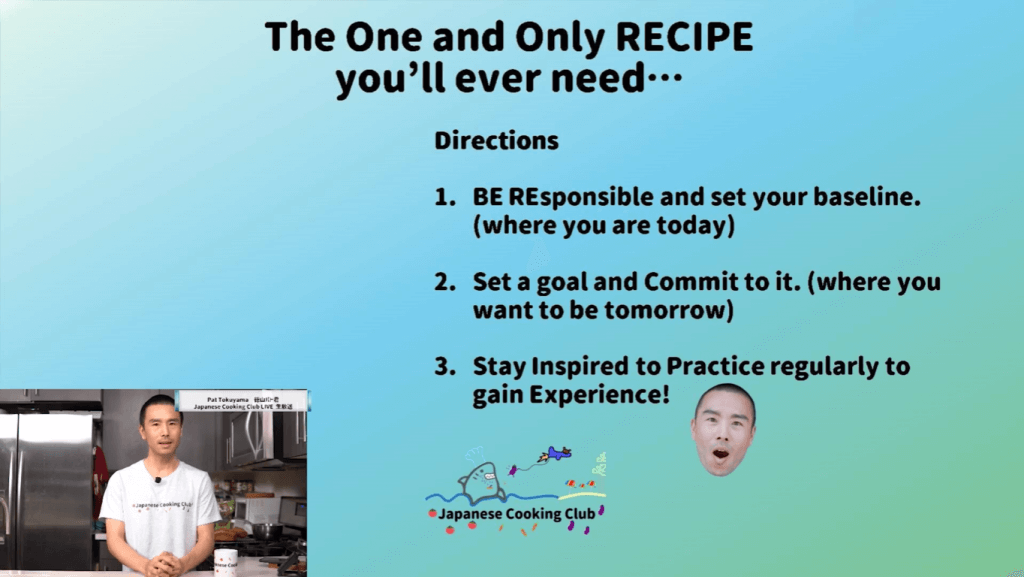 The first is to be responsible.

In the cooking club, which we’ll be learning about later, I do set monthly goals for you guys to keep you on track of whatever it is that you’re trying to accomplish there.

And I want you to be in terms of setting your baseline going into that mindset, that you have the ability to make change when you want to. And if you set your baseline today, that gives you something that you can measure your progress with going forward.

I know for me, sometimes, I get pretty ambitious in terms of what I can accomplish in a day. For example, when I’m cooking Indian food, I’ll try to cook three or four different curries. And like I mentioned before, usually, it takes around 45 minutes for one curry. But I usually have my food processor and all of my spices and stuff out. So it’s not as long or not as time-intensive.

But I usually get over-ambitious in that regard, trying to cook too many Indian dishes and maybe one will eventually get left off the menu and I won’t make it.

So that’s an example right there. But in terms of what you can accomplish in a year or 10 years, chances are, in a year, I could probably cook maybe 40, 50, 60 different curries during that time. So consider that. That’s the first step for this recipe.

Everybody has different goals and aspirations, and that’s something that you need to decide for yourself and come up with. Consider that as well for this one and only recipe that you’ll ever need.

And the last thing is to stay inspired to practice to gain experience. Inspiration is critical. I know this first hand because when I’m not inspired to cook, I don’t cook.

And chances are, you do the same. Or if you don’t, then more power to you. But the places that I look for inspiration for my cooking are mostly from travel. In my travels, I try to travel internationally when I can. Also, cooking magazines and just online, I guess. Those are my three sources of inspiration.

That’s an external motivating factor as opposed to something internal where you want to be healthy. Being healthy, taking care of yourself, that’s kind of like an internal motivation or a source of inspiration, right? Because you want to take care of yourself. That comes from the inside. And that’s also one of my motivations for cooking plant-based is to be healthier.

Practice regularly. With practice comes confidence, the skills, the experience, the perspectives, all of which are going to shape your habits and your perspectives, and ultimately, your lifestyle.

Maybe because you enjoy cooking plant-based Japanese food so much, it’s going to open up the door for other types of plant-based foods.

So Japanese food is not the only plant-based cuisine out there. There’s also Indian food, which can be plant-based. The point is, there are other things that you can eventually try because you started on this journey of a plant base. And there’s a lot of different avenues that you can pursue after the fact. And hopefully you’ll give a plant-based Japanese food a good try and make it part of your regular routine.

Tweet
Pin1
Share
1 Shares
In case you missed them, here are some of my other blog posts!