This segment is going to be about the myths and misconceptions surrounding plant-based foods. I have nine of them for you. There’s a lot more than these nine, but I think these nine are very important and need to be addressed. 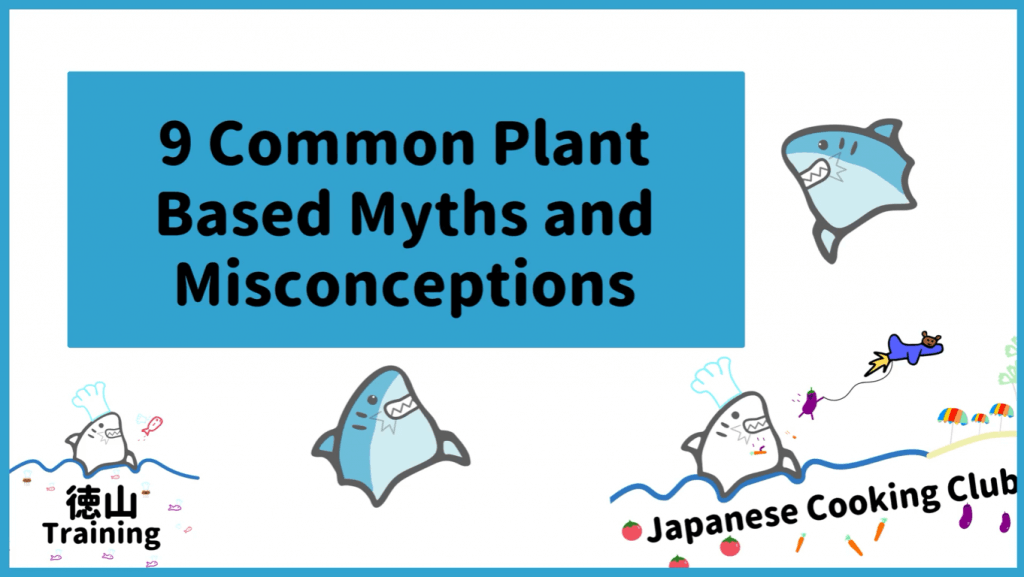 People think automatically that when they hear plant-based food, that it’s healthy.

“Oh, plant-based? Healthy, right?” Chances are, you’ve seen the commercials or those articles about those plant-based burgers, like the impossible burger which are made with plants. And now all the other fast food chains, they’re also incorporating plant-based food into their menus.

Just because it’s plant-based does not mean that it’s healthy. One of the ways that you can get around that and ensure that plant-based food that you eat is healthy is by incorporating whole food plant-based foods into your lifestyle.

The second thing is that plant-based is not a magical pill. Plant-based is just one aspect of primary prevention. We have exercise. It’s important that you exercise as well. You can’t just be sitting around all day doing nothing. You have to get your heart rate up.

You have to exercise on a regular basis as well. That’s the other primary, I guess you’d call it even a pillar of primary prevention to prevent yourself from getting diabetes, high blood pressure, or heart disease. In addition, wellness. I kind of also touched on were things like mindfulness, meditation practicing your faith, whatever that may be.

It’s just one thing that is going to help to keep you healthier in the long term, and has many, many benefits on top of that.

Vegan is about excluding animal products. It’s very, very different. I don’t want to be associated as a vegan because I’m not a vegan. I enjoy eating meat and I enjoy eating fish. And maybe in the future, I will eliminate them completely, but I still like to eat those types of foods. And I don’t ever want to get criticized for eating them because it’s part of my heritage.

You know, Japan is an island nation. So they eat a lot of fish, for one thing. And it’s my choice. It’s a personal choice. I respect people’s choices, what they like to do in life. I’m not here to judge anybody.

Plant-based is not vegan. It’s its own special thing. And that’s why I like it. And chances are, that’s why you like it too is because it’s not so restrictive. And you have a little bit of freedom there in terms of if you want to eat meat or fish. Nobody’s going to come and hunt you down.

Plant-based does not equal no protein. So, this is another myth that you guys may know of. And if you grew up in the US, you may remember those commercials like milk, it does a body good. And the person drinking the milk with the mustache. So we’ve been indoctrinated ever since we were little. The way that we should eat, the way that we should drink, what’s healthy, what’s not healthy. And if you can look back over history, these changes over time.

And I think right now, we’re at a moment that people are starting to wake up and realize that things are changing. For example, back in the 20s, maybe early 1900s, if you remember, cigarette smoking actually used to be considered healthy. It was endorsed by the medical association, the physicians at that time, as healthy.

It was promoted by athletes, which is pretty ironic if you think about it. But now, I think most of us know that smoking is probably one of the most unhealthy things that you could ever do to your body. With regard to plant-based foods. I think people are starting to realize that plant-based foods are healthy and you don’t necessarily need to eat meat to get your protein.

So a lot of plant foods like beans, grains, for example, have a lot of protein in them, even vegetables themselves. So if you think of green peas and mushrooms, all of those things have protein. And you can get all of the protein that you need from these plant sources. So that’s another myth.

You need to make it a priority. As I was showing you earlier, the effects of food diet are more longterm. The benefits are going to be longterm in terms of your health. And if you make your health a priority today, in the long term, you’ll be able to look back and say, “Wow, I’m really glad that one year ago, 5 years ago, 10 years ago, I decided to incorporate more plants and vegetables into my diet.”

Stay away from processed foods, stay away from animal products to avoid getting cardiovascular disease, maybe even to lose some weight and get your diabetes under control.

I’ve had some older friends that I’ve talked to, and they’ve told me that they wish that they took better care of themselves when they were younger. And just hearing that, I know that I don’t want to be in that position when I’m their age. So you have to ask yourself. Is it something that you want to take control of now, or regret later on down the line because you didn’t make it a priority?

Too expensive. It’s not really that expensive. I showed you earlier that plant-based sources of protein, which is going to be, in general, the most expensive part of your meal, is a lot cheaper than animal or fish proteins. So it’s not too expensive. And I actually created a tool that I shared earlier this summer. I’ll share it again with you guys,

But it’s basically a plant versus animal or fish protein calculator. And you can see for your family size, if you’re just cooking for one or two people versus like four, six people in your family, how much money you can save in just one month, in three months, in six months and all the way out to a year. And you might be surprised how much money you would actually save just by even just starting with one meal per week or one meal per month. It adds up over time. So thinking or believing that it’s too expensive is a myth. It’s not true.

In terms of being difficult, I see this a lot of times, and I know cooking can be considered difficult, but what is it that’s difficult? If you’ve ever asked yourself, is it difficult just because you’ve never done it before? And in that case, if you do it one time, will it be easy? Or if you do it a second or third time, will that be easy? What is it that’s difficult about cooking? Or cooking healthy specifically? You gotta ask yourself. What truly is difficult about it? Because people use that as an excuse as well.

But this is my perspective. This is how I see things. If you’re receptive to it, maybe you’ll agree.

And in terms of plant-based, vegetarian, vegan food not being tasty, bland, I actually probably agree with this. And the reason that I say that is because in general, my eating out experiences, eating at a restaurant, a cafe, getting takeout, whenever I get vegetarian food, vegan food, or if I’m lucky, there’s a plant-based restaurant, it’s usually not that tasty.

If it doesn’t look good, you don’t really look forward to eating it. Whereas if you get like a piece of art, like a very nicely-presented dish. For example, if you’ve ever gone to a fine dining restaurant, they do a very good job of presenting the food and making it look very delicious. It’s gonna taste very delicious.

Also, if the ingredients are fresh and seasonal, not coming from a can, not frozen, not processed, if it was made from scratch, made with love, then chances are, it’s going to taste a lot better because of that. But usually, in restaurants, especially chain restaurants they have a few very popular vegetarian chain restaurants here in Orange County, LA area. The food’s not that good.

And I can see why people might not think that the plant-based food category or vegetarian food, vegan food, is not delicious because they’re eating out, and that’s their experience. They may not ever make it at home from scratch to realize for themselves that plant-based food, vegetarian, or vegan food, when made at home, is really, really delicious, and just as good, if not better than what you’ll get at a restaurant.

So if you don’t enjoy cooking, then I guess you shouldn’t do it. Maybe you should hire a personal chef or have your significant other or somebody else cook for you. But plant-based cooking can be fun. And one of the things that I personally enjoy about it is it’s very challenging because I grew up my whole life cooking fish and meat, and cooking with vegetables trying to incorporate different ingredients and flavors and combinations.

It’s very challenging. And I enjoy creating and experimenting and trying new things. So I enjoy it. And I guess it’s how you look at cooking or plant-based food in general. Are you more of a glass half-full or a glass half-empty type of person? Are you more optimistic or pessimistic?

In terms of plant-based, I think you can look at it both ways. If you like cooking, you’ll love it. And if you don’t like cooking, maybe it’s not for you. Then again, cooking anything wouldn’t be for you either. So anyway, let me know what you guys think about the nine myths and misconceptions surrounding plant-based Japanese food.

In case you missed them, here are some of my other blog posts!