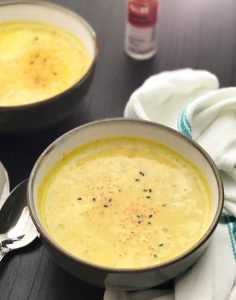 I don’t know why but “Bibbidi-Bobbidi-Boo” popped into my head when I was thinking about pumpkins.

If you don’t remember the song you can listen to and watch it here. According to Wikipedia, the lyrics are total nonsense. I wonder how many times the singer had to practice to get the sounds right!!

So while I wonder about that, let me take you back to my kabocha soup. This is my next recipe as part of my eating healthy in Fall series.

If you saw my Fall arugula salad recipe, you may have seen that I pan-roasted some kabocha. That recipe only used half of the kabocha I bought.  I made this soup with the other half.

Since the weather has been cooling off a bit what better time than now for soup!

I’ve made butternut squash soup and kabocha soup several times before and like them equally.

But today, I will be sharing a Japanese kabocha soup（かぼちゃスープ) recipe with you. In Japanese ‘soup’ is pronounced soo-pu.

Pumpkin soups tend to be thick, sweet, savory and hearty. I generally eat them as an appetizer to something else since they aren’t filling enough to make a meal. (no protein!)

I liked this soup since it had a good rich flavor and was on the lighter side. It was also very easy to throw together. It would be perfect for cooking on a weeknight.

My favorite thing about soups is that they generally freeze well. So you can easily double this and have something saved for the future. And that is exactly what I did 😀 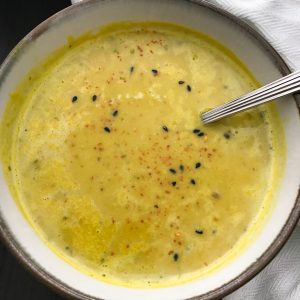 What to look for when buying Kabocha

When I’m at the market looking for kabocha,  one of the things to look for is a little bit of gold/yellow/gray on the exterior skin. That tells you it is ripe.

If all you can get is solid green kabocha that is okay too. I’ve used both and they always taste good!

Never heard of kabocha before? Read more about it here at Wikipedia!

Here is a video of me finishing up the soup with my new immersion blender !! 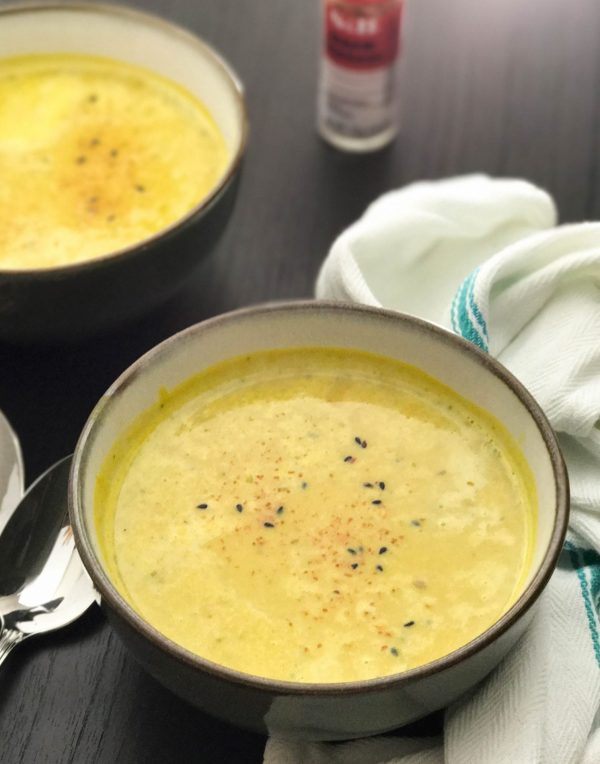 If you want a rich gold color versus the yellow/green of my soup, you can deskin the pumpkin prior to cooking. But I like to keep the skin on for the nutrition!

You can use more pumpkin if you want it will just be a thicker soup!

Tweet
Pin59
Share4
63 Shares
In case you missed them, here are some of my other Japanese recipes!