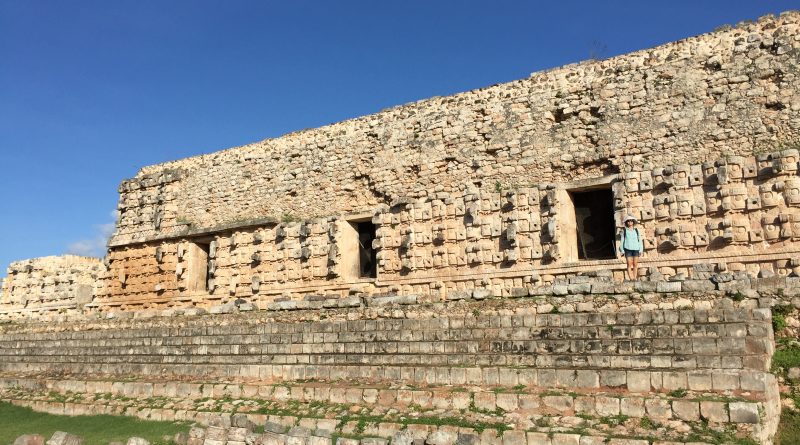 Having heard from so many people that I needed to go to Merida over the years, I finally made it! We were there for 5 nights and stayed at the Hampton Inn using points. It was a brand new hotel and very nice.  Though outside of the city, I would stay again for the value. 5th night free using points @ 5k points per night is a steal. In order to get around, we rented a car. Alamo had a shuttle for us waiting at the airport. From there, it was about a 10 minute ride to the office just outside the city. We bought Mexican car insurance online through Sanborn’s.

Using Merida as a base, we made a couple day trips to go see the ruins (Uxmal, Kabah, Sayil, Labnah and Chichen Itza.)

Uxmal was the most crowded of the first 4 ruins we saw. But this shouldn’t be surprising since its the closest to Merida. As we drove further away, there were less and less tourists which really allowed us to enjoy the atmosphere and quiet of the surrounding jungles. Though you couldn’t climb the main temple at Uxmal, you could go up the surrounding buildings. The other ruins were also open game. At the top of some, you can see above the tree line of the jungle and the surrounding area. So it was nice to be able to do that.

Kabah was probably my favorite spot. I liked all the faces carved out of the wall. The stone carvings were remarkable. They really look like faces and even better in person. I also liked how the place is overlooking the land from a hill up high, so you have a nice view of the land below. Also, there was no one there when we visited.

Sayil and Labnah were my least favorite. Compared to the first two ruins, there wasn’t as much to look at. However, it was very scenic and quiet.

Lastly, on a different day we went to Chichen Itza. This place was a zoo compared to the other ruins we had visited before. Lots of crowds and big buses even though we arrived at opening. Chichen Itza was the biggest complex though. In summary, the temple looks just like you would expect it to. We were able to see everything after about an hour and half of exploring so we decided to leave.

On the way back to Merida, we stopped at a Cenote in Yokdoznot. We were literally the only people there (around 10am) or so which was nice.  The actual water level is probably 50 feet or so below street level. So you feel like your descending deep and dark. The trees above the cenote provide a lot of shade so it was quite cool temperature wise. Also, the water was cool, with an opaque aqua color to it. In the water, there were little fish swimming too. If there is one cenote you plan to visit, I would recommend checking this one out. Especially after seeing pictures of cenotes being overrun with tourists.

Didn’t run into any problems in terms of the drive like police, except on the way back into Merida. There was a police check point. He almost was going to stop us from going through. But let us go after asking a bunch of questions like where did you come from, what did you do there, where are you going etc. He really wanted to pull us over, but his buddy came over and waved us through.

Mayan and Mexican food in the Yucatan

In terms of food, we ate lots of meat… The first place we ate at was Chaya Maya on calle 55, it is right next to the park and inside the restaurant there is a courtyard which the tables surround so there is a very nice ambiance. This is the place to go if you want to try Mayan food.

We had solid tacos at Wayan E‘s @ Calle 15 92-E por 20 y 18, Itzimná. There are two locations, but only one shows up on tripadvisor. If you go, you should go relatively early since they run out of meats toward the end of the day. (We realized that when we got there in the late afternoon.)

Los platos Rotos was a good change after eating lots of Yucatan food. The cuisine here is more mainland Mexican and is a place I would go back to. Mostly locals, and I think they have local farmers markets on a weekly basis right next door if you want to try and time your visit.

La pequena Susana was a Yucatan food restaurant we ate at. I had poc chuc that wasn’t that inspiring so not sure I would recommend this place. But maybe I ordered the wrong thing.

Toward the end of the trip we had really good Italian food at Oliva Enoteca.  So if you want good Italian that is the place to go. It was packed when we went and the food was really good!

We were planning to go to Kuuk on the last night. I called the day before to make a reservation, but on the day of we showed up and they were closed already~!! Must have been miscommunication on my part, so it’s a place I will definitely go to on the return.

In terms of sweets, we went to Ki Xocolatl several times, not only to buy chocolate but to also get their frozen chocolate drink which was a refreshing drink given the heat. It’s essentially a chocolate slushy.

In conclusion, the Yucatan was a good representation of how diverse Mexico as a country can be. The weather was great and food equally good. I would definitely return to Merida in the future. And next time I go Kuuk will be first on the list of restaurants to visit!!

On the way, we had a one night layover in Mexico City . Having never been to Coyoacan, we went to explore this district. There is a restaurant called el morral famous for Chiles en Nogada, so I ordered that and it was REALLY good. If you’ve never had it, I would recommend this restaurant for trying it.

We also stopped at a cafe called el jarocho which was pretty busy in the evening and they even had their roaster going! After this we tried to find churros, but damn yelp and whoever put it on google maps because we never found the phantom churro place,  🙁

For more of my travel diaries, please visit the travel section!

Tweet
Pin2
Share
2 Shares
In case you missed them, here are some of my other Travel posts!