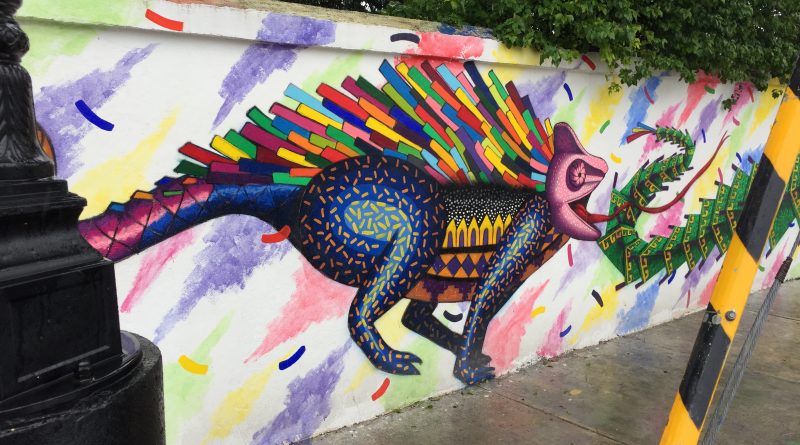 Took a red eye out of Los Angeles and arrived Saturday morning in Cozumel airport. Getting in to town was pretty quick. We could have walked, but decided to take a cab instead. (lots of luggage). We read that you can get a better fare walking away from the terminal and thats what we did. There was a taxi waiting just outside the airport. After a quick negotiation we were on our way!

We stayed at Caribo Bed and Breakfast. This place looked just like it did in the pictures (always a good thing) and the owner was very nice. First thing we did after arriving was grab lunch at a fish taco place. El Sazon de Camaron was just down the street from our hotel. Tacos fried to order, tasted very good! Shrimp had a bit more flavor than the fish so we ordered a couple more of those before we left.

The B&B was also right next to a nice restaurant, called Casa Mission. At first, it seemed a little high end with a gated courtyard. But it was packed with locals at breakfast and lunch when we went. Breakfast was a very good deal if you got the set menu, it was around 40 pesos. Lunch was priced similarly for the set menu. Probably the best food we had while on the island, but make sure you get the set menus as that’s what the locals were ordering.

Our primary reason for visiting the island was to dive. Cozumel is a world class diving destination and has a lot of different dive sites. Unfortunately, we only got to dive one day. The weather wasn’t cooperating and it rained the next two days, so the first day of diving was all that we got to do.

The day we did dive, visibility was very good, at least 80 -100 ft. Water temperature was in the mid to upper 70s. Second dive was very good, saw turtles, lobsters, octopus, sharks, manta rays and a turtle. Good thing was that it wasn’t very crowded at all. I think of all the places in the world I have dived, Ko Phi Phi, where I got decompression sickness seemed to be the most crowded. So if you are a diver, I would recommend checking out Cozumel, there are a lot of animals to see.

The ferry ride between Cozumel and Playa del Carmen was only 40 minutes or so. But because of the storm there was a lot of swell in the ocean that separates the two cities. We both got seasick on the way over. So much so, that we decided to walk 20 minutes to our hotel rather than take a cab.

We stayed for 6 nights in Playa del Carmen at the same hotel. To get around we had rented bicycles from the hotel. These were extremely useful to get around with. Especially since there are some streets that have dedicated bike lanes. In addition, we were even able to bike through most of Playacar which is a nice residential neighborhood. So if you like being active I would really consider renting bikes.

There was also one night that we got stuck in the rain. It was pouring so hard, the hardest rainfall I’ve ever experienced in my life. The streets were flooded in minutes. It was literally like standing in an outdoor shower. There was that much water falling down. We took shelter under a gas station but after 15 or so minutes it didn’t seem like it was gonna let up and we were getting cold from being wet. Finally, we just said screw it and rode our bikes back. The rivers of water we rode through were pretty deep, so it took us a while, but we made it. Also, our shoes got ruined from all the dirty water. So we got new ones the next day.

So while we had a good time the first part of our trip with the bikes, we didn’t get to use them the entire time we were there. On our 4th night our bicycles got stolen. We locked them up against a light post, just off the main street where bikes and motorcycles are supposed to park. When we went to go get them they were gone.

We talked to the police and they had no idea what could have happened. They said if we wanted to, we could go to their central station and get a report. The station was located about 30 minutes from downtown by taxi. So we did that. But once we arrived, we found out we had to be the owners of the bikes to get a report!! They wouldn’t give us a report because we didn’t own them.

So after all that work and wasting a half day we went back. With all that we just went through, our hotel was very unhelpful and useless. They would not request a report for us because it was too much trouble.  All the hotel wanted was for us to pay for the bikes. As a result of this, I wouldn’t recommend staying here and they will remain unnamed.

Some highlights of include-

La Michoacana paleterias- which are all over the city, cold popsicles in hot weather are a good combo. Plus they have lots of different flavors.

La Famiglia -an italian restaurant with good pasta and pizza

El Pirata -Best ceviche in PDC, locals only place a bit far from downtown but very worth it. People were waiting around on the weekend for tables.

Towards the end of our trip we took an ADO bus down to Tulum. It was only about an hour ride each way. Tulum is a quiet town with one main street downtown. We had some good ceviche while we were there at El Camello Jr. Also, had a couple paletas since it was quiet hot. From the bus station you can take a taxi to the Ruins.

The ruins were not very crowded when we went. But that was right when they opened. Once inside we probably walked around for an hour and were able to see all of it. After the ruins, we walked to the beach and hung out for a bit. After that, since there wasn’t anything else around that area we decided to go back to Playa del Carmen.

When I initially bought the return tickets, I accidentally left my card at the window. Luckily when I went to change the tickets for an earlier bus, the guy recognized me and told me I left my credit card there. Good thing it wasn’t stolen!! Now having been to Tulum, I can see the appeal it has. It’s quiet and charming. It still is relatively undeveloped and has a distinct feel as compared to Playa del Carmen. Tulum is more of a place to relax and take it easy while Playa del Carmen seems a lot more like a regular city with eating, shopping and nightlife.

We were there during the second week of this event and got to visit a few of the parties going on. In summary, the music was good and it was a good time. The lines weren’t bad since we had wristbands, but if you didn’t some of them were pretty long. The crowd was pretty mixed, I think there were a lot of Europeans and definitely a lot of locals and some Americans.

Some of the venues were way over capacity. Meaning, you were shoulder to shoulder with people in the crowd. This was especially the case at Martina Beach, which is literally on the water. So that was no bueno. But the indoor venues weren’t as bad. The jungle was my favorite venue, since it was literally in the jungle, outside the city. So, there was plenty of space to move about.

For more of my travel diaries, please visit the travel section!

Tweet
Pin3
Share
3 Shares
In case you missed them, here are some of my other Travel posts!