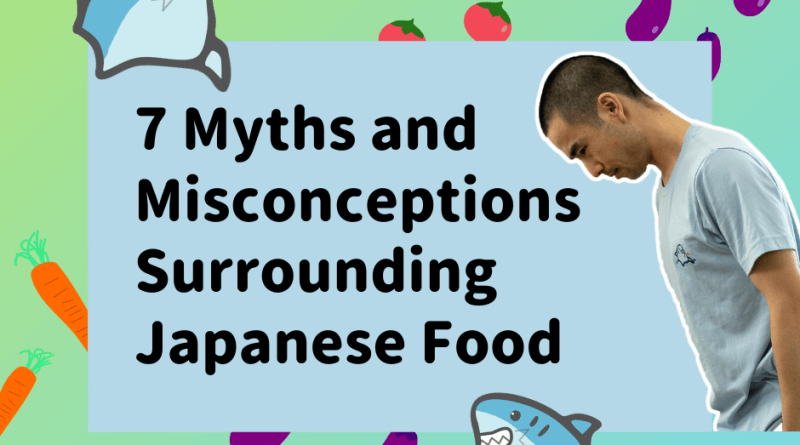 Myths and misconceptions may be keeping you from actually giving Japanese food a try, and I want to get those out of the way so that it’s no longer an obstacle for you in cooking healthy plant-based Japanese food. 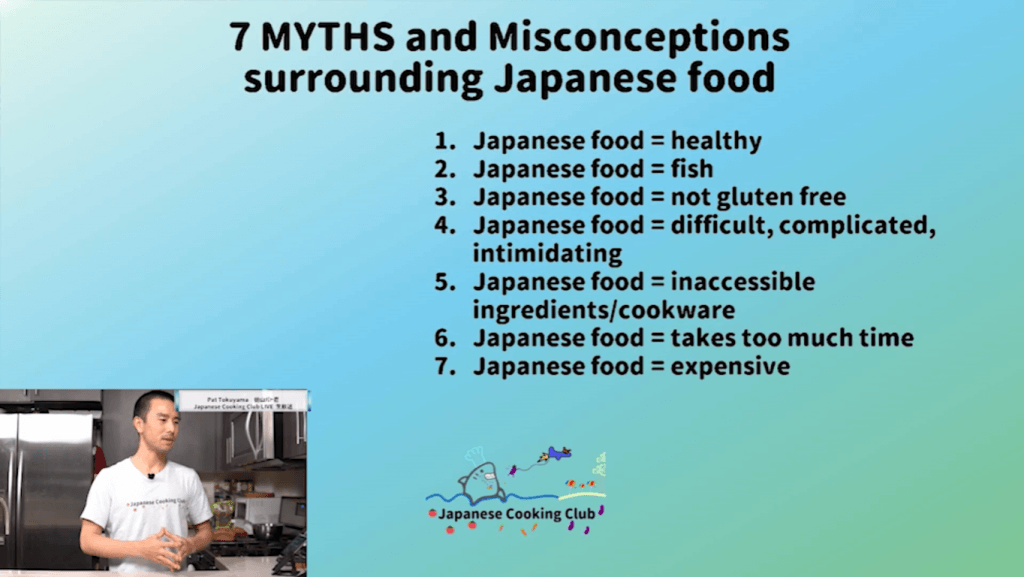 The first myth is going to be that Japanese food is healthy. I think that’s a stereotype. And yes, Japanese food can be healthy, but it really depends on what you’re eating and how it was cooked. If you’ve ever been to a Japanese supermarket, it’s just like an American market. All of the stuff that you’re supposed to buy is around the perimeter.

All the fresh stuff, the produce, and then in the Isles, all the aisles in between the produce and the seafood, and the meat, and the bread, or whatever, is all the processed stuff. The stuff that is shelf-stable. It has preservatives, probably has color, probably has a lot of salt added to it, all kinds of other things that you don’t necessarily want to be eating.

And a lot of that is just like here in the US. It’s easily accessible, and it’s convenient, and people buy it. It’s not necessarily the healthiest thing for you to eat because it’s generally processed. It’s been stripped a lot of its natural nutrients because otherwise, they would deteriorate from just sitting on the shelf for so long.

And then all the additives that you don’t necessarily want to be eating. So Japanese food can be made often with those processed and highly processed and shelf-stable ingredients. So for example, if you go to like a curry restaurant, I know Japanese curry is very popular and if they’re not making it from scratch they might be using a boxed mix, which is something that I used to eat all the time.

And also, in Japan, fried foods are pretty popular. Things like tempura, tonkatsu or karaage, all those things. They are deep-fried, and they’re not necessarily the healthiest thing for you. But traditional Japanese food doesn’t necessarily require deep-frying and that kind of cooking technique, so you can actually get away without using very much oil, if any at all, depending on what you’re making.

So if you’re the type of person who’s trying to do a whole food plant-based lifestyle, where you’re not using any kind of cooking oil, for example, plant-based Japanese food would be a good match for that because you’re not necessarily using all of those ingredients.

Most of the things that you’re cooking are going to be from scratch. Vegetables and the seasonings that we have discussed in one of our many cooking lessons on the Japanese pantry ingredients. That’s one myth and misconception. All Japanese food is healthy. And while I’m not saying that you should stay away from those things completely, I think that you can have a healthy lifestyle with eating things in moderation.

It’s just that those shouldn’t be the main things or things that you have regularly as part of your diet.

So in terms of Japanese food equaling fish, yes, it is a country that is in the middle of the ocean. It’s an island country. And naturally, they are going to be eating fish because that’s a good source of protein. Not all Japanese food contains fish.

If you are familiar with Japanese food, you know that dashi is often made with dried fermented fish flakes, katsuobushi, and depending on what you’re making, you can actually get away with not using that fish product. So you can actually make a vegetarian, or vegan, or plant-based dashi, which I have shared with you in one of my mini cooking lessons, the kombu, and shiitake dashi.

Not all Japanese food necessarily needs to have fish products, or be served with cooked fish, or even raw fish like sashimi. Another myth or misconception is that all Japanese foods contain fish and that’s not true.

Japanese food is not gluten-free

I know that one of the people in my initial group, daidokoro, was a gluten-free person. And she didn’t know that until I did some live training to show her that it’s possible to cook Japanese food without gluten.

I think for the most part, in general, if you’re trying to be gluten-free, it’s the soy sauce. That’s going to be the main ingredient for most of the dishes that you’re going to be making that has wheat products in it. And you can just use gluten-free soy sauce and that would take care of that. If you never really considered that before, maybe now you can consider it.

Chances are, if you’ve already cooked a dish or two, or three — or several, you know that that’s not necessarily true.

Japanese food is not that complicated. It only requires a handful of ingredients. As I mentioned in my essential pantry ingredients video, as well as a shopping list, if you got a chance to take a look at that, hopefully, that’s something that you’ll be able to experience and know for yourself as opposed to just me telling you.

Japanese food is inaccessible because of the ingredients or requires special cookware but for the most part, the cookware that I use is really just a knife. You need a kitchen knife, obviously, if you’re going to be cooking. And then also just my regular stainless pots and pans. Depending on if I’m making like a hot pot, I might do that at the table. Like if I’m having guests over.

But for the most part, all you need is a knife, cutting board, some pots, and pans, and you can make Japanese food. It doesn’t require any special ingredients. Yes, there are going to be tools that will make things easier for you. So for example, if you have like a suribachi, which is a Japanese style mortar and pestle, that’ll help you to grind things. If you have a food processor, that could help also, to speed things up.

Every now and then, I do use those tools because that’s what they are. They’re tools to help you be more efficient and more productive in terms of what it is that you’re trying to accomplish. If you’re just getting started, you don’t need anything special that you know is going to be hard to find.

Everything is there. You just click it and add it to your cart. If you have Amazon Prime, it will be shipped to your door in a couple of days. It doesn’t get any easier than that. And now, that’s no longer an excuse for you not to cook Japanese food.

Japanese Food Takes Too Much Time

Japanese food in general is relatively simple to prepare, and it doesn’t take too much time. And if you’re concerned about time, what you can do is scale your recipes. If you don’t do that already, just make double or triple the recipes, freeze or put the rest in the refrigerator. That way, you don’t have to cook later on in the week.

And that’s going to save you time because you doubled or tripled the recipe intentionally so that you have leftovers. Japanese food, like cooking anything, can save you time if that’s your approach.

I think Japanese food is probably one of the most simple foods or cuisines that you could ever cook with. And as a comparison, Indian food requires a lot of different spices, and it takes a lot of time and effort to prepare a curry dish as compared to one Japanese dish. For example, it usually takes me around 45 minutes to prepare one true Indian Curry. But in general, my Japanese dishes take anywhere from maybe 20 to 30 minutes from start to finish.

So there’s a little bit of a difference in terms of the time that’s required. And then also the ingredients. If you’re making an Indian Curry from scratch, half of my spice cabinet is all Indian spices because I love Indian food. And you’re going to be generally using anywhere from maybe 7 to 15 different spices.

Yes, Japanese food can be expensive. If you’re eating out all the time, it’ll get expensive really quickly, especially if you’re going to a good restaurant where there are Japanese people that are making the food and it’s authentic.

It’s going to be expensive. Usually, when I eat sushi and I’m traveling, it’s probably around $20 to $30 minimum for a one-person sushi dinner. Yes, it can add up if you allow it to, but if you’re cooking it at home, you can really cut the cost in half, maybe even less than that.

I generally don’t eat sushi out too much, especially when I’m home because it’s very simple to make at home. And so I usually just make it. I’ll get the sashimi from the market, and I’ll make the rice, and I have some nori, and I’ll have a sushi dinner at home on a budget. That could be one incentive for you, if money is a concern, to cook the Japanese food at home because it’s a lot quicker.

Tweet
Pin2
Share
2 Shares
In case you missed them, here are some of my other blog posts!